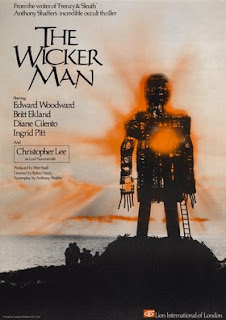 HORROR/DRAMA/MYSTERY with elements of a musical

The subject of this review is The Wicker Man, a 1973 British horror and mystery film from director Robin Hardy.  The film was inspired by the 1967 British horror novel, Ritual, by author David Pinner.  The Wicker Man follows a devout Christian police sergeant who goes to a remote Scottish island to search for a missing girl and runs up against pagan islanders.

Police Sergeant Howie (Edward Woodward) travels to the remote Scottish island of Summerisle where he’s been mysteriously called to investigate the disappearance of a young girl, Rowan Morrison (Geraldine Cowper).  However, he immediately finds the locals uncooperative, and the community is nothing like he expected.

The devout Christian detective finds the islanders openly reveling in wanton lust, often having sex in public.  The pastoral community is led by Lord Summerisle (Christopher Lee) in the practice of a religion that recognizes the “old gods” and the islanders also recreate various rituals practiced by the Druids.  Offended by what he believes is pagan blasphemy, Sgt. Howie is blind to how dangerous this secret society actually is to him.

Director Robin Hardy and writer Anthony Shaffer’s The Wicker Man is one of the most popular cult films from Great Britain.  In fact, one of the film’s stars, Christopher Lee, calls it one of the 100 best British films ever made.  Although its shock ending (and it’s a doozy) would mark the film as a horror movie, in many ways, The Wicker Man is a melodrama – one with a highly usually subject matter for a mainstream film, but a melodrama, nevertheless.  Early on, The Wicker Man almost becomes a musical because the first half of the film is filled with the villagers in song (singing tunes written by Paul Giovanni, the film’s composer, and Gary Carpenter).  These Celtic folk song-like ditties (about pagan festivals and with an emphasis on ritual, metaphor, and fertility) add to the movie’s surreal air without making the film seem wholly implausible.

Ultimately, questions about the plausibility of The Wicker Man will decide how viewers receive it.  Granted, there are holes in logic, and some incidents in the movie just don’t make sense (There is also a 100-minute director’s cut that provide more explanations into the various concepts in the film.), but sometimes the movie seems like a weirdo documentary about an actually island of pagan hippies.  While the performances and filmmaking is generally good, it’s this touch of realness that makes the film so eerily… real?  The movie makes the viewer ask:  “Could this happen” or “Is this based on a real story,” and that makes The Wicker Man haunt you long after you watched it.

The film drifts in the middle of the second act and early in the third act.  However, the final ten minutes or so may leave the viewer shivering and feeling a strong sense of dread, fear, and maybe shock and confusion – just like a good horror flick should.


Posted by Leroy Douresseaux at 5:24 PM