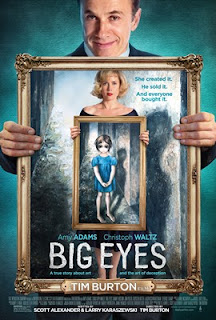 Big Eyes is a 2014 biographical drama from director Tim Burton.  The film is a dramatization of the complicated relationship between American pop-art painter, Margaret Keane, and her husband, Walter Keane.  Brothers Bob Weinstein and Harvey Weinstein are executive producers on the film.

Margaret Keane is famous for her “big eyes” paintings, which are paintings featuring children as waifs with big doe eyes.  For a decade, Margaret's second husband, Walter Keane, took credit for the paintings because, as he told Margaret, people would take her paintings seriously if they were credited to a man.  Margaret's paintings became hugely popular in the 1960s and earned the couple a large fortune, but Walter became more domineering the more prominence “big eyes” art attained.

Big Eyes opens in 1958 in Northern California.  Margaret Ulbrich (Amy Adams), a painter, leaves her husband and takes her young daughter, Jane (Delaney Raye), with her.  Mother and child arrive in North Beach, San Francisco where Margaret's friend, DeAnn (Krysten Ritter), lives.  One day, Margaret in selling drawings in a local park when she catches the attention of Walter Keane (Christoph Waltz), a painter who is also selling his art in the park.

When director Tim Burton's 2003 film, Big Fish, debuted, some critics said that Burton had finally made an adult film instead of his usual, a fantasy film.  Big Fish actually had its share of surrealism and eccentricity, like practically all Burton's work.  I think Burton's first adult film was the fanciful biopic, Ed Wood, which was more humorous than dramatic.

One might call Big Fish an adult film, but I found it dull and stiff.  Burton's 2014 movie, Big Eyes, is a drama, and it is similar to Ed Wood in that both movies focus on an outside or cult artist.  Big Eyes simply plays the biographical matter in a straighter fashion than Ed Wood.  In that movie, Ed Wood and his band of merry filmmakers were weirdos (and I'm not saying this in a pejorative manner).  Margaret Keane's art may be weird, but the screenwriters, Scott Alexander and Larry Karaszewski, and even director Tim Burton take her life seriously.  Their movie is a fictional account of Keane's life that details the path she took to independence and to an awakening.

Since her coming-out-party in the indie film, Junebug, Amy Adams has been one of the best American actresses of the last decade.  As Margaret Keane, she gives one of her best performances, if not her best.  She embodies in herself and shows the struggle of a woman who is trying to break free of everything that holds her back – including herself.  In her face and in her emotions, Adams conveys the trials of the artist trying to claim her own work and of a woman living in an era when the wife must be “the little wifey” and little more.

It is a testament to Christoph Waltz's skill as an actor and a performer that he keeps Walter Keane from being burned in the radiance of Adams' performance.  Waltz makes it impossible to believe much of what Walter says, but he also keeps the fraudulent painter from becoming a caricature.  In his hands, Walter is a fully realized character, which I realized when I noticed that I was sympathetic to him (just a little) by the end of the film.

Big Eyes, which is essentially a low-budget independent film, is Tim Burton's first good movie in a few years.  With Ed Wood 20 years ago and with Big Eyes now, he shows that he sympathizes and identifies with artists who are off the beaten path, but who take their art as seriously as the “elite” artists.  Burton does indeed know how to let the best dramatic actors do some of their best work.  While I like a “serious” film (or Burton's version of it) such as Big Eyes, I do want more Tim Burton movies like Beetlejuice and Sleepy Hollow, which are both Oscar-winners, by the way.


Posted by Leroy Douresseaux at 4:05 PM