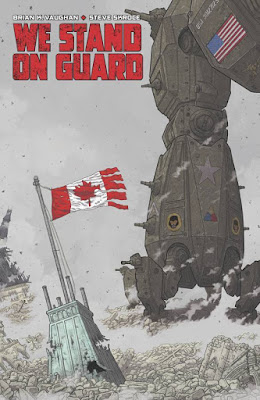 It’s Canada vs. the United States in an international signing tour to promote the release of WE STAND ON GUARD #1, writer Brian K. Vaughan’s first new Image series since the launch of SAGA, and a return to comics for legendary Hollywood storyboard artist (and proud Canadian) Steve Skroce.

WE STAND ON GUARD is an action-packed military thriller about a futuristic conflict between Canada and the United States, so in honor of their story, the creators will be appearing together at two different signings, one in each of their home countries.

Vaughan and Skroce will be enjoying Canada Day, July 1st, 2015 in the United States, with an epic release party at the world-famous MELTDOWN COMICS in Los Angeles, CA from 7 – 9 p.m.

Then, they’re be spending their Independence Day, July 4th, 2015 in Canada, at the acclaimed GOLDEN AGE COLLECTIBLES in Vancouver, B.C. at 1:30 p.m.

Which signing will be better attended? “Nobody knows,” said Vaughan, before warning: “But whichever nation loses will be forced to keep Justin Bieber… forever.”

Both events are free to the public, and the oversized 40-page first issue of WE STAND ON GUARD is priced at only $2.99.Vaughan and Skroce will be happy to sign whatever readers bring—time and lines permitting.

And if you’d rather not pick a side, Vaughan and Skroce will also be appearing together at this year’s IMAGE EXPO onThursday, July 2, on the relatively-neutral ground of San Francisco, at the Yerba Buena Center of the Arts. Tickets available right now at ImageComics.com!