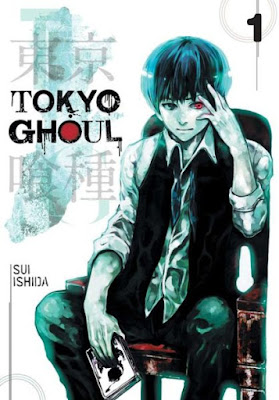 San Francisco, CA – VIZ Media, LLC (VIZ Media), the largest distributor, publisher and licensor of manga and anime in North America, takes readers on an incredible journey into the dark world of the flesh-eating undead that live in secret all around us with the launch of Sui Ishida’s acclaimed manga (graphic novel) series – TOKYO GHOUL – on June 16th, 2015.

TOKYO GHOUL is rated ‘T+’ and individual volumes will carry a MSRP of $12.99 U.S. / $14.99 CAN each. Future print editions of the 14-volume series will be published on a bi-monthly basis. The series is also underway digitally on VIZManga.com and the VIZ Manga App and is available worldwide from the Nook, Kobo, Kindle, iBooks, comiXology, and GooglePlay stores.

Ghouls live among us, the same as normal people in every way – except for their craving for human flesh. Shy Ken Kaneki is thrilled to go on a date with the beautiful Rize. But it turns out that she’s only interested in his body – eating it, that is. When a morally questionable rescue transforms him into the first half-human half-Ghoul hybrid, Ken is drawn into the dark and violent world of Ghouls, which exists alongside our own. Trapped between two worlds, he must survive Ghoul turf wars, learn more about Ghoul society and master his new powers.

“In Japan, TOKYO GHOUL has already sold more than 6 million copies. English readers have been clamoring for it for a while so we’re excited they’ll finally get to tear into the official VIZ Signature release,” says Joel Enos, Editor. “Sui Ishida’s alternate reality is an action-oriented take on zombies but with a harrowing dose of teen angst. Ken is turned by the girl he’s in love with and she just wants to eat him! Now Ken’s got to navigate this fragile, torn and bloody line between the worlds of the living and the dead.”

Manga creator Sui Ishida was born in Fukuoka, Japan. TOKYO GHOUL won him the Young Jump 113th Grand Prix award in 2010 and was debuted as a series in Japan in Weekly Shonen Jump magazine in 2011. The popular manga also was adapted into a widely watched anime series in 2014.

For additional information on TOKYO GHOUL and other manga and anime titles published by VIZ Media, please visit www.VIZ.com.