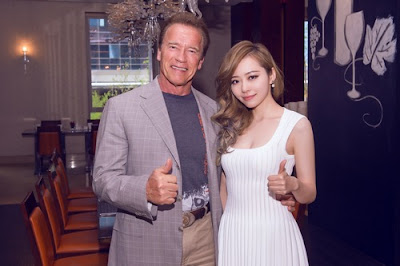 The partnership represents the first time that Zhang has recorded a song for an English-language film and marks Big Sean’s musical debut for a feature film.

“Fighting Shadows” will be released digitally in Asia by Sony and the rest of the world by Def Jam Recordings. It is available to download at iTunes beginning June 30th.

“Contributing to the ‘Terminator Genisys’ movie and inviting Big Sean to collaborate was a very special opportunity for me,” said Zhang. “I am really looking forward to the moment when people get to hear this song.”

Zhang will be featured on CCTV 6’s “Talking to Hollywood with Betty Zhou” this Friday, June 19th at approx. 5:30 p.m. and on future episodes. Fans can receive more information about Zhang and “TERMINATOR GENISYS” by following Betty Zhou’s official Weibo page http://weibo.com/bettyzhoulingan or @Betty周玲安.

“I have been a huge fan of Arnold and the ‘Terminator’ movies since I was a kid, so it’s especially exciting to be a part of the new film,” said Big Sean. “Working with Jane has been an amazing experience and I can’t wait for audiences around the world to hear her song.”

Zhang is a Chinese pop singer who came to prominence after her performance in the 2005 season of the Super Girl contest, a national all-female singing competition in China.

Zhang's debut album, “The One,” was produced by Craig Williams. Her next album, “Update,” broke away from the Chinese pop scene by combining elements of R&B and jazz. After its release, Zhang participated in a World Peace One concert with such artists as U2, Madonna, Pink Floyd and Green Day to increase awareness and activism for world peace and to raise funds for humanitarian relief. She made her American television debut on The Oprah Winfrey Show with the release of her third album, “Jane@Music.”

“Believe in Jane,” Zhang's fourth album, was released in 2010. Following its popularity, she performed at the first New York China Film Festival, where she was awarded most popular Chinese singer, and further represented China in the 7th Asia Song Festival held in Korea. She has recorded two songs for the Chinese film “EMPRESS OF CHINA” and was selected to record “Fighting Shadows” for “TERMINATOR GENISYS” due to her unique vocal range and talent.

American hip hop artist Big Sean has earned worldwide attention since the release of his debut album “Finally Famous” in 2011. As his first major label effort, the album made an impressive #3 Soundscan debut in the U.S., solidifying a joint venture by Kanye West’s G.O.O.D. Music with Island Def Jam Music Recordings.

With more than 10 million records sold to-date, Sean was the first rapper to ever perform at the White House and has released two successful shoe designs in partnerships with Adidas Originals. While his professional work as an artist keeps him extremely busy, Sean makes the time to use his resources to give back through his Detroit-based non-profit, the Sean Anderson Foundation.

He is currently on a worldwide tour promoting his third major label album, “Dark Sky Paradise,” which debuted at #1.

The film is produced by David Ellison and Dana Goldberg. Written by Laeta Kalogridis & Patrick Lussier. Directed by Alan Taylor.

Posted by Leroy Douresseaux at 5:15 PM