Review: "Son of God" Has Power 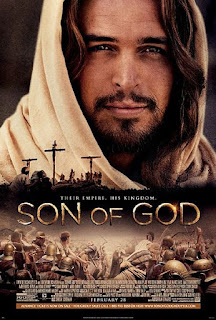 Son of God is a 2014 religious film and Biblical drama from director Christopher Spencer.  The film is a follow-up to the hit 2013 cable television miniseries, “The Bible” (History Channel), from husband and wife producing team, Mark Burnett and Roma Downey, who also produced this movie.  Son of God follows the life of Jesus Christ, from His birth to His resurrection, especially focusing on the time from when Jesus began his public ministry to his Crucifixion.

Son of God opens with John (Sebastian Knapp), the last surviving disciple of Christ, as an old man living in exile as he tells his story.  John narrates the story of Jesus' birth, before moving 30 years forward in the story.  The adult Jesus (Diogo Morgado) begins gathering followers, including Peter (Darwin Shaw), John, and Judas (Joe Wredden), who would eventually betray him.

Jesus' popular ministry upsets the status quo in Judea, earning him the ire of the Pharisees, the Jewish religious leaders.  Caiaphas (Adrian Schiller), head of the Pharisees, believes that Jesus is a grave threat, so he begins to plot against him.  When Jesus and his disciples enter Jerusalem for the upcoming Passover holiday, Caiaphas seeks the help of Pontius Pilate (Greg Hicks), the prelate who has command over Judea for the Roman Empire.  But are the Pharisee and the Roman part of a plot or are they part of a larger plan that that neither they nor Jesus's disciples can truly understand?

I found Son of God to be both an uplifting and a truly entertaining film.  That surprised me because I found much of the film's first hour to be awkward and overly mannered.  The film initially seems like a stiff and clunky stage production mounted by sincere and well-meaning Christians who have little or no idea about how powerful the cinematic narrative can be.

However, after the halfway point, the film rapidly grows more powerful and the narrative more insistent.  It become emotional and heartrending, but also invigorating and celebratory.  I felt the Holy Spirit move me as Jesus suffered the Passion and the Crucifixion.  [I was once Roman Catholic.]

Son of God features some scenes that were part of “The Bible” miniseries.  I only recognized a few scenes, as I did not watch much of the TV miniseries.  The acting in Son of God is a little better than the acting featured in movies shown on religious cable networks like TBN.  However, this film is not about the acting; it is about the story.

Yes, this film did receive many bad reviews from movie reviewers and film critics, but the film isn't as dull, as heavy-handed, or as preachy as some said.  Also, Son of God isn't quite a “Sunday School lesson,” as some would have you believe.  When Son of God hits its narrative stride, it is powerful and moving, and even inspiring.  Hey, the best part of this movie moved me into giving it a high rating.  This film does quite well by the story and message of the Son of God.

Posted by Leroy Douresseaux at 4:47 AM