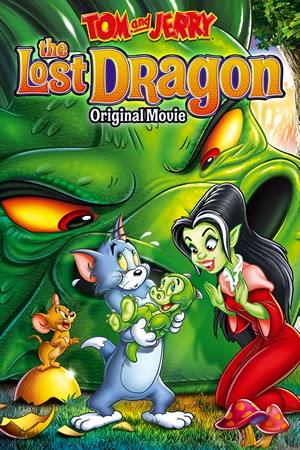 Once upon a time, Drizelda the witch (Vicki Lewis) threatened a small hamlet that is the home of a group of blue elves.  Her evil plan is stopped by the wizard, Kaldorf the Great (Jim Cummings).  Years later, Drizelda's niece, Athena (Kelly Stables), operates Athena's Home for Unwanted Animals on the edge of the hamlet.  Tom and Jerry, two of the animals living with her, find a dragon's egg that soon hatches.  Suddenly, Tom is “mama” to a baby dragon that Athena names, Puffy (Kelly Stables).  However, Drizelda is determined to steal Puffy as part of her new diabolical plan.

Tom and Jerry: The Lost Dragon blends elements of the Lord of the Rings film and of Walt Disney's Sleeping Beauty.  Sometimes, it is hard to tell where the Tolkien ends and the Disney begins.  The crocodile from Walt Disney's Peter Pan, or one that really looks like it, also appears as one of Athena's “unwanted animals.”  The Lost Dragon's animation even looks like a Disney house-style.

Beyond that, there is nothing noteworthy about Tom and Jerry: The Lost Dragon.  It has a few cute songs, and a few of the characters are mildly amusing.  The villain, Drizelda, is half-menancing, and her henchman, a trio of cats:  Tin, Pan, and Alley, steal a few scenes and provide some comic relief.