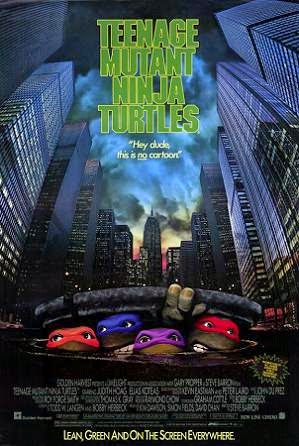 Teenage Mutant Ninja Turtles opens in New York City (late 80s or early 90s).  The city is in the midst of a crime wave of pick-pockets, burglaries, and general thievery.  Rumors abound that the thieves are mostly young children and teenagers, perhaps connected to something called the “Foot Clan,” which apparently originated in Japan.  This is according to April O'Neil (Judith Hoag), a television news reporter at station WTRL – Channel 3.

In fact, O'Neil comes across some of these very same thieves ransacking a news van, and they promptly attack her.  A mysterious band of warrior rescues April, introducing her to a world under the streets and in the sewers of the city.  April's rescuers are four anthropomorphic turtles; these mutated, man-turtles walk and talk, and, like other teenagers, they love pizza.  They are also ninja warriors, according to their mentor and surrogate father, Splinter (Kevin Clash), a mutated, anthropomorphic rat who is also a master of the ninja arts.

Now, April and these four teenaged mutant ninja turtles:  Raphael (Josh Pais), Michelangelo (Robbie Rist), Donatello (Corey Feldman) and Leonardo (Brian Tochi) unite to unravel the secrets of the city's crime wave.  Street vigilante, Casey Jones (Elias Koteas), joins them, but will all of them be enough to stop The Foot and its leader, The Shredder.

With the release of Paramount Picture's reboot of the franchise, also entitled Teenage Mutant Ninja Turtles, earlier this past summer (2014), I decided to revisit the 1990 film.  I vaguely remember liking it then.  I was surprised to find that I actually liked it after recently watching it again.

Teenage Mutant Ninja Turtles 1990 is quaint, but irresistibly cute and likeable.  Everything about is 1980s cheesy:  the sets, the clothes, the music, the attitude, and the Turtles' dialogue.  It's as if every teen movie, good or bad, was strained of its slang and lingo to create the dialogue for these teenage mutant ninja turtles.  The entire movie also looks like it was shot in the ghostly, abandoned sets of 1980s break-dancing movies.