Review: "The Wind Rises" and Lifts Miyazaki's Ode to Artists 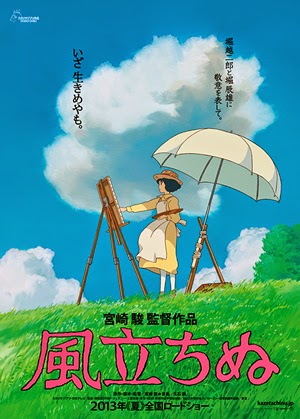 The Wind Rises is a 2013 Japanese animated film (anime) biopic and drama from director Hayao Miyazaki.  The film's original title is Kaze tachinu, and it is adapted from Miyazaki's manga (comics), Kaze tachinu, which was published in Model Graphix magazine from 2009 to 2010.  The manga in turn is loosely based on the novel, The Wind Has Risen (1936-37), by author Tatsuo Hori.

The Wind Rises is a fictionalized account of the life of Jiro Horikoshi (1903–1982).  Hirokoshi was a designer of fighter aircraft for Japan, in particular the Mitsubishi A6M Zero (or simple, the Zero), which was used by the Empire of Japan during World War II.

Walt Disney Studios released the film in English back in February 2014 through its Touchstone Pictures division.  Frank Marshall acted as the English version's executive producer.  The Wind Rises was the final film directed by Miyazaki before his retirement in September 2013.

After he graduates, adult Jiro (Joseph Gordon-Levitt) starts working for an aircraft manufacturer (Mitsubishi).  Jiro begins a quest to built a fighter aircraft for Japan that will match the best that any other country has to offer, especially that of Japan's ally, Germany.  Jiro reunites with the adult Nahoko (Emily Blunt) and begins a romance with her.  However, Nahoko's illness and his professional setbacks threaten Jiro's dreams.

The Wind Rises was somewhat controversial in Japan because of Jiro Horikoshi's aircraft inventions and how they were used by imperial Japan during the second World War.  However, The Wind Rises is not a biographical drama in the conventional sense, which is why I call it a “biopic.”  It is a movie with both biographical elements and fictional attachments.  For instance, the Jiro-Nahoko Satomi romance is fictional, and Nahoko is a character from Tatsuo Hori's novel, The Wind Has Risen.

The Wind Rises not only takes a look at the life of Jiro Horikoshi, the man who designed Japanese fighter planes during World War II, but it is mainly inspired by his quest to create fighter aircraft for Japan that would match the best aircraft created in Europe and the United States.

The Wind Rises is an impressionistic spectacle.  Miyazaki deliberately deviates from fact in order to examine the artistic process, revealing Jiro Horikoshi as an artist in full bloom.  The “wind” in this film is a metaphor for the imagination that soars.  The wind is also a vehicle by which the artist travels to meet the man who inspired him,  Giovanni Caproni, in the realm of daydream and imagination – first as a pupil and then, as an equal.  In this film, Miyazaki does not make “wind” ethereal; rather, it is beauty that is fragile and even corruptible.

The Wind Rises is a bittersweet goodbye from Miyazaki to his admirers and fans.  This retirement had to happen eventually, but our sadness need no be overwhelming.  The wind still rises, and the beauty of Hayao Miyazaki's art will live on.