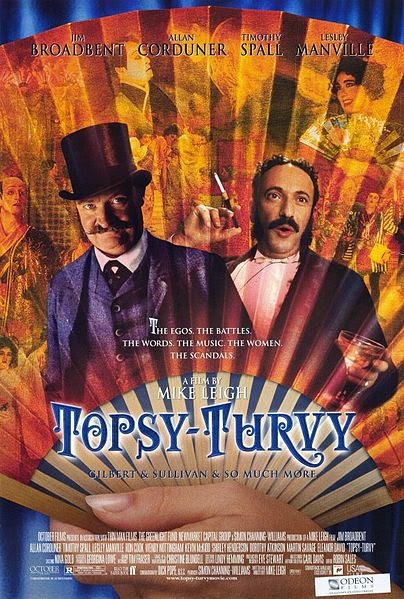 The subject of this movie review is Topsy-Turvy, a 1999 musical drama and comedy film from writer-director, Mike Leigh.  The film is a fictional account of the relationship between Gilbert and Sullivan, following a failed opera and leading to the creation of the duo’s masterpiece, The Mikado.

Topsy-Turvy is writer/director Mike Leigh’s fictional account of the comic opera team of Gilbert & Sullivan during a particular period in their partnership.  After the lukewarm critical reception of the comic opera, Princess Ida, in 1884, English composer Sir Arthur Sullivan (Allan Corduner) has grown weary of his 13-year partnership with playwright and comic librettist William Schwenck “Willie” Gilbert (Jim Broadbent) and of Gilbert’s topsy-turvy scenarios.

Sullivan embarks on a tour of Europe and when he returns he begins to work on what he calls serious musical compositions.  However, the musical partners have a contract to fulfill with their producer Richard D’Oyly Carte (Ron Cook) for the Savoy Theatre (which had been built to house Gilbert & Sullivan’s operas).

After much disagreement among Sullivan, Gilbert, and Carte, Gilbert writes the scenario for The Mikado, a story inspired by Gilbert’s experiences from his visits to an exposition of Japanese culture, history, and art held in London in 1885.  Topsy-Turvy (a term used to describe the kind of fictional scenarios that involved ordinary humans encountered magic and sorcery) follows the creation, development, and staging of The Mikado.  Leigh’s fictional account shows Sir Arthur Sullivan working on the music and Willie Gilbert struggling with the actors to get the staging, acting, and singing just right.  His attention to detail also brings him into conflict with actors over costumes and the assignment of roles.

The film should be a treat to fans of Gilbert & Sullivan, and Topsy-Turvy is an excellent look at both the creative process and all the work that goes into staging an opera, everything from conducting the music and designing the sets to staging the cast and preparing for opening night.  There are a lot of very good performances in this film, but nothing from the leads (Broadbent and Corduner) stand out other than from the fact that they are the leads.  Andy Serkis (Gollum and Smeagol of The Lord of the Rings trilogy) makes a nice turn as the opera’s choreographer.

Leigh gives a look at the behind-the-scenes struggles and politics of raising a staged work that is quite interesting and almost academic in its details.  The film, however, does come off as a bit cool, and Leigh does too much teasing about the private lives of Gilbert & Sullivan, without revealing anything but tidbits.  Still, Leigh manages to make a unique and exceptional film that shines in spite of a few flaws.

Posted by Leroy Douresseaux at 9:38 AM