Review: "Balls of Fury" is Funnier Than it Looks (Happy B'day, Maggie Q) 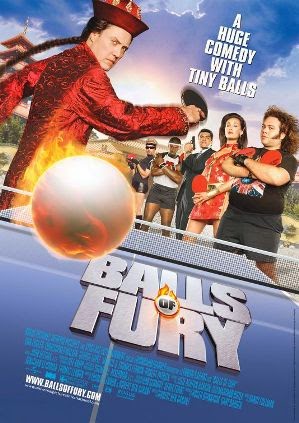 The subject of this movie review is Balls of Fury, a 2007 sports comedy film from the team of co-writer/director Robert Ben Garant and co-writer Thomas Lennon.  The film follows a down-and-out former professional ping-pong phenom recruited by an FBI agent for a secret mission that may also lead the former child star to his father’s killer.

Balls of Fury takes place in the unsanctioned, underground, and unhinged world of extreme ping pong where the competition is brutal and the stakes are deadly – sort of like the way Dodgeball portrayed the mean world of professional dodge ball.  But we get the joke!

A ping pong professional as a child, Randy Daytona (Dan Fogler), spiraled downwards after an embarrassing loss at the 1988 Seoul Olympics.  Cut to the present.  Randy is down on his luck and on his game, and he’s performing at a nightclub when FBI Agent Ernie Rodriguez (George Lopez) recruits him for a mission to spy on one of the FBI’s most wanted men, the faux-Asian crime lord Feng (Christopher Walken).  Randy has some incentive to do take the assignment because Feng was responsible for the death of Randy’s father.

“Operation Ping Pong” requires Randy to get an invite to Feng’s underground ping pong championship tournament.  To do that, Randy will have to get his game back into shape.  With the help of a blind ping pong sage, Master Wong (James Hong), and his niece, Maggie Wong (Maggie Q), an expert ping pong trainer, Randy gets in winning form and gets an invite to Feng’s jungle compound where the tournament is being held.  Now, Randy will have to face a raft of formidable players en route to the prize, including his arch-nemesis, German Olympic ping pong god, Karl Wolfschtagg (Thomas Lennon), and still take down Feng.

Balls of Fury is a parody/remake of the 1973 Bruce Lee film, Enter the Dragon, by way of Dodgeball and Comedy Central’s television series, “Reno 911.”  In fact, Balls of Fury co-writer/director Robert Ben Garant and co-writer/actor Thomas Lennon are part of the brain trust behind “Reno 911,” and the kind of sheer absurdity that marks that hit comedy series is much in evidence in Balls of Fury.

This film is sometimes shamefully in poor taste, and its lack of political correctness often borders on bad taste.  Still, it’s fun; Balls of Fury takes a look at sports and competition and pokes numerous holes in the gas bags that are elite athletes, secretive trainers, and arcane rules.  Then, the movie skewers so many sports movie stereotypes, from the sage-philosopher mentors to the sad sack underdogs.  Balls of Fury may look like a bad movie (and sometimes it truly is), but it is a comedy that delivers laughter.

Posted by Leroy Douresseaux at 9:02 AM