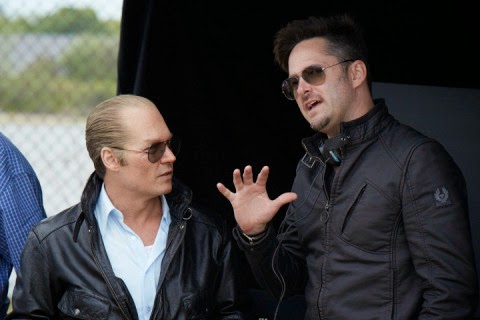 (L-r) JOHNNY DEPP as Whitey Bulger and director SCOTT COOPER on the set of the as-yet-untitled Whitey Bulger film, which has begun filming on location in Boston. Photo credit: Claire Folger

Scott Cooper is directing the film on location in Boston

BURBANK, Calif.--(BUSINESS WIRE)--Principal photography is underway on the as-yet-untitled drama based on the book Black Mass: The True Story of an Unholy Alliance Between the FBI and the Irish Mob, about the infamous gangster Whitey Bulger. The film stars Oscar® nominee Johnny Depp (“Sweeney Todd: The Demon Barber of Fleet Street,” “Finding Neverland,” the “Pirates of the Caribbean” films) as Whitey Bulger and Joel Edgerton (“The Great Gatsby,” “Zero Dark Thirty”) as FBI Agent John Connolly. Filming began in Boston under the direction of Scott Cooper (“Out of the Furnace,” “Crazy Heart”).

Brian Oliver, Tyler Thompson, John Lesher, Patrick McCormick and Scott Cooper are producing the film, with Peter Mallouk, Lauren Selig, Brett Granstaff and Gary Granstaff serving as executive producers. The screenplay is adapted from the book Black Mass: The True Story of an Unholy Alliance Between the FBI and the Irish Mob, by Dick Lehr and Gerard O’Neill.

In 1970s South Boston, FBI Agent John Connolly (Edgerton) persuades Irish mobster James “Whitey” Bulger (Depp) to collaborate with the FBI and eliminate a common enemy: the Italian mob. The drama tells the true story of this unholy alliance, which spiraled out of control, allowing Whitey to evade law enforcement, consolidate power, and become one of the most ruthless and powerful gangsters in Boston history.