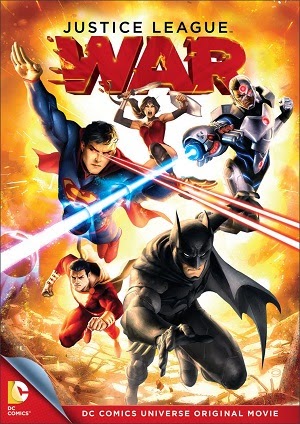 Justice League: War takes place on an Earth where superheroes are new and largely unknown to people.  In fact, one of these new superheroes, Batman (Jason O’Mara), is believed to be behind a series of strange abductions of people occurring in Gotham City.  The superhero, Green Lantern (Justin Kirk), arrives to investigate the case, but discovers that the abductor is really a monstrous alien, known as a Parademon.

With the help of another new superhero, Superman (Alan Tudyk), Batman discovers that this Parademon is part of a vanguard of an alien invasion of Earth.  Soon, the trio is joined by more new powerful heroes:  Wonder Woman (Michelle Monaghan), Flash (Christopher Gorham), and Shazam (Sean Astin).  Meanwhile, high school football star, Victor Stone (Shemar Moore), is about to have his life changed forever because of the Parademon invasion.  Darkseid (Steve Blum) is coming, and maybe, only a new hero called Cyborg knows why.

Back in August 2011, DC Comics essentially rebooted its line of superhero comic books, known as the DC Universe.  Familiar characters like Superman, Batman, and Wonder Woman were basically the same, but their origin stories and the events of their (fictional) lives were altered.  Some characters, like Cyborg and Shazam, underwent big changes.  DC Comics called this re-launch, “The New 52.”

The New 52 was highly controversial among many serious (or hardcore) DC Comics fan.  I liked it; the freshness made me feel like I was a kid again, discovering comic books for the first time.  But I must also admit that I no longer take comic book continuities and mythologies as seriously as I once did.

Honestly, Justice League: War did not feel new so much as it simply felt like something different, maybe a little strange and unfamiliar.  It’s entertaining, but nothing special.  Writer Heath Corson makes the character conflicts, interactions, and relationships interesting.  Director Jay Oliva delivers some slam-bang sci-fi violence and battle action.  This movie certainly looks like a comic book, especially the kind with big fight between superheroes and super-villains.

Beyond that, I think Justice League: War is for fans of the comics and other DC Universe animated movies.  There isn’t much here to attract anyone who is not already enamored with these comic book animated movies.