Review: "The Legend of Hercules" is Tolerable 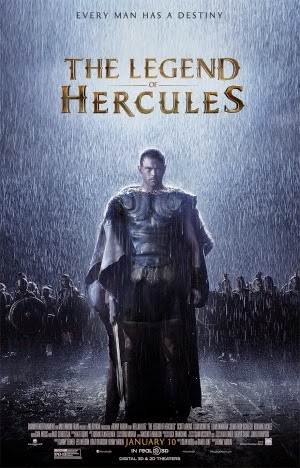 The Legend of Hercules is a 2014 action-fantasy film from director Renny Harlin.  This movie is based on mythical Greek hero, Hercules.  It offers a new origin story of Hercules and finds him learning to embrace his destiny, as he fights a brutal king.  Although they do not receive credit on screen, director Renny Harlin and Giulio Steve apparently co-wrote the screenplay for The Legend of Hercules, along with credited writers, Sean Hood and Daniel Giat.

The Legend of Hercules opens in 1220 B.C. in the nation of Argos in Southern Greece.  King Amphitryon of Tiryns (Scott Adkins) leads his army in a bid to conquer Argos and to defeat its king, Galenus.  Queen Alcmene of Tiryns (Roxanne McKee), disgusted by her husband’s warmongering, begs the gods for guidance.  The goddess Hera sends a message that Alcmene will give birth to the son of the god, Zeus, and that this son will be the savior of her people.

Alcmene gives birth to a child that Amphitryon names Alcides, but that the Queen names Hercules.  Hercules (Kellan Lutz) grows into a strong young man, and he falls in love with Hebe (Gaia Weiss), daughter of the King of Crete.  That love turns Hercules into an exile.  Now, the half-human and half-god young hero must use his formidable power to fight his way back to Tiryns in order to save Hebe and his kingdom.

Hmm… What to say?  I did enjoy some of The Legend of Hercules, but the best word to describe it is “mediocre.”  It is one of those sword-and-sandal movies (like the 2004 film, Troy) that would work better as a sword-and-sorcery film (the Conan movies).  Like 2004’s Troy, The Legend of Hercules drains the myth of its magic (although not quite as much or as badly as Troy did), and the movie clearly suffers for it.

The acting is bad.  Kellan Lutz, best known for his role in the Twilight film franchise, is pretty bad here.  He looks like someone took one of those overly muscular G.I. Joe dolls and gave it action figure steroids.  I swear you can see the stretch marks on Lutz’s bulging muscles, as if his workouts have tortured his skin.  The poor acting exception is Liam McIntyre; as Hercules’ cohort, Captain Sotiris, McIntyre gives a performance that is good enough to make it stand out from the rest of cast, which seems to sleepwalk or shuffle through this film.  [Well, Scott Adkins eagerly throws himself into overacting as King Amphitryon.]

So if you want to watch action-fantasy with sword-fighting, battles, and Greek heroes, The Legend of Hercules will do.  At least, it is not puffed up with pomposity, superiority, and pride like Warner Bros. 300 film franchise.


Posted by Leroy Douresseaux at 1:32 PM