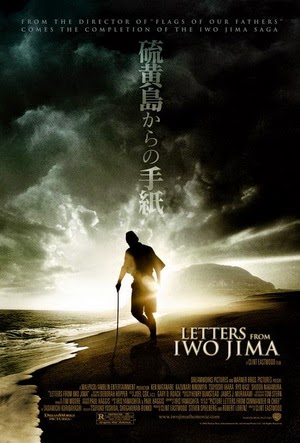 The subject of this movie review is Letters from Iwo Jima, a 2006 war film from director Clint Eastwood.  Set during World War II, the film is almost entirely in the Japanese language and tells the story of the Battle of Iwo Jima from the perspective of the Japanese soldiers.  Eastwood also makes contributions to the film’s score which was created by his son, Kyle Eastwood, and Michael Stevens.

Letters from Iwo Jima is director Clint Eastwood’s companion piece to his film, Flags of our Fathers.  The films form a two-part examination of the ordinary men who fought on both sides of World War II during the crucial battle for a small island.

As tens of thousands of Allied troops storm Iwo Jima, Japanese General Tadamichi Kuribayashi (Ken Watanabe) knows his men are outnumbered, running low on supplies, and have no hope of troop support or even rescue.  The Japanese troops prepare to meet their fate – to die in battle or to die by their own hands.  Gen. Kuribayashi and a soldier named Saigo (Kazunari Ninomiya) often pass the time writing letters to their wives, although they realize that the letters may never reach mainland Japan.

Eastwood directs Letters from Iwo Jima with stark simplicity that makes even its bloodiness seem eloquent and the drama never heavy-handed.  For a war picture, Letters from Iwo Jima is surprisingly both quiet and thoughtful.  Even the battle scenes come across as a time for reflection.  If there are still any doubts about Clint Eastwood as a talented director who has the ability to weave intimate character dramas, then, Letters from Iwo Jima should put that hogwash to rest.

Eastwood is also quite good at directing actors and getting strong dramatic turns from both his leads and his supporting cast.  Letters’ cast is strong, but Kazunari Ninomiya and Ken Watanabe stand out, in particularly the latter.  Watanabe has a regal air about him, but there is substance in all his performances.  He’s old Hollywood – a “face,” but he also has the dramatic chops to bury himself in characters and bring them to life.