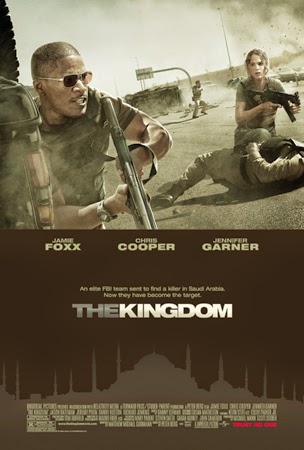 The subject of this movie review is The Kingdom, a 2007 action thriller and crime drama directed by Peter Berg.  The film follows a team of agents from the United States, investigating the bombing of an American facility in the Middle East.

When terrorists attack and kill over 100 people at the Al Rahmah Western Housing Compound in Riyadh, Saudi Arabia, FBI Agent Ronald Fleury (Jamie Foxx) leads a small squad to investigate the bombing and find the culprits.  Once Fleury and the other U.S. agents – Grant Sykes (Chris Cooper), Janet Mayes (Jennifer Garner), and Adam Leavitt (Jason Bateman) – arrive, they learn that in Saudi Arabia, many consider them the true enemy.

Culture and the local bureaucracy hamper their investigation, but a local policeman, Col. Faris Al Ghazi (Ashraf Barhom), becomes sympathetic to Fleury’s predicament.  Soon, Fleury realizes that he and his team are the targets of the mysterious terrorist leader, Abu Hamza, but neither the threat of death or disgrace back home will stop Fleury’s mission.

With The Kingdom, director Peter Berg (The Rundown, Friday Night Lights) and writer Matthew Michael Carnahan (Lions for Lambs) dive headlong into the snake pit that movies about the “war on terrorism” and set in Middle East can be.  What Berg and Carnahan come up with is an imperfect, but entertaining and engaging action flick that doesn’t shy away from the fact that there are few if any easy answers when fighting the murderous criminals who are terrorists.

Berg doesn’t shy away from making a hardcore action movie.  There are intense car chases, with the requisite automobile flips and explosions, and there are sequences of manic gun battles that arrive in the kind of big slabs that keep an action movie junkie euphoric.  The screenplay even insists on being a police procedural, making The Kingdom something like Black Hawk Down meets Michael Mann’s Heat (Mann also co-produced The Kingdom), and TV’s “CSI: Crime Scene Investigation.”

Honestly, the movie drags when it focuses on the investigation, detective work, and forensics.  On the other hand, The Kingdom soars when it lays on the gun battles and car violence.  When the movie tries to be an FBI investigation flick, the narrative and indeed the performances get bogged down in detective work and the complications that can arise when different cultures meet.  The film does raise several issues – asking questions that complicate what many only want to see as black and white.  Are the FBI agents seeking justice or are they out for revenge?  Does the subsequent violence only make matters worse?  Does anyone gain anything or does everyone lose?  These are the kind of questions that get a movie like this in trouble in the current political/social climate.  An action movie requires that everything be in black and white, but the film’s setting and the issues it tackles just won’t be divided in two like that.

Ultimately, The Kingdom is a riveting action thriller that delivers.  It affirms that Jamie Foxx can carry an action flick (but is there room for more than one or two action “stars of color?”), that Jason Bateman is funny, and that Jeremy Piven is a great character actor.  However, the audience might have to take on some sticky issues to enjoy the thrill ride that is The Kingdom.