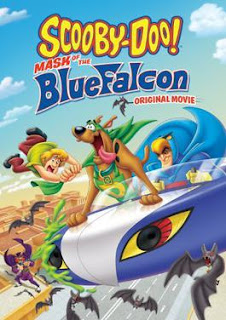 The gang arrives at the San Pedro Convention Center and finds the place packed with attendees in costumes, vendors with merchandise to sell, and even a bitter, faded actor. Owen Garrison (Jeff Bennett) was the original Blue Falcon, and he is angry that fans have forgotten him. Producer/director, Jennifer Severin (Nika Futterman) is re-launching the Blue Falcon franchise with an updated and darker movie, “The Blue Falcon Reborn: Dynomutt’s Revenge.” There is a new actor, Brad Adams (Diedrich Bader), starring as the Blue Falcon.

Meanwhile, one of the original Blue Falcon’s enemies, Mr. Hyde (John DiMaggio), begins terrorizing the convention and threatening to stop the premiere of the new Blue Falcon movie. Suspicion is directed at Garrison as the identity of the diabolical Hyde, but Shaggy and Scooby don’t believe it. Can this dynamic duo solve the mystery of Mr. Hyde or will they just end up being laughingstocks?

The Scooby-Doo animated television franchise is probably the signature creation of Hanna-Barbera Productions, Inc., the former American animation studio that dominated American television animation for decades. Scooby-Doo! Mask of the Blue Falcon is like a reunion of old Hanna-Barbera characters and shows, especially those that appeared on Saturday morning network television in the 1960s and 70s. Of course, Blue Falcon and Dynomutt the Dog Wonder were the stars of Dynomutt, Dog Wonder, a half-hour segment of The Scooby Doo/Dynomutt Hour, which originally aired during the 1976-77 television season.

In fact, in one form or another, several Hanna-Barbera characters appear in Scooby-Doo! Mask of the Blue Falcon, including The Flintstones, Frankenstein, Jr., The Herculoids, Space Ghost, and Speed Buggy, among many. That may be why I like Mask of the Blue Falcon so much. While it is not great, I do think this movie is one of the better recent Scooby-Doo direct-to-DVD films. I am giving it a rating of 8 (of 10), which I translate to a grade of “A.” Perhaps, I should be a bit more conservative here, but I like this film enough that I could not see myself going to anything below a 7. That’s a Hanna-Barbera fan for you!

Anyway, Mask of the Blue Falcon’s animation is nice and has sharp colors (which is generally true of the series these last few years). The character animation is good, and while the characters’ motion is not as good as it is in feature animation, they never look clunky and clumsy.

What makes Mask of the Blue Falcon stand out is characterization. Mystery Inc. and many of the supporting characters have personalities, desires, goals, conflicts, etc. There is Scooby-Doo’s need to be a hero like Dynomutt, and Owen Garrison’s bitterness. Daphne’s obsession with a toy line, the “Littlest Fuzzies,” is a nice change of pace for the character. I did notice something peculiar. Whenever, Mayor Ron Starlin of San Pedro (Kevin Michael Richardson) was on-screen, the background music changed to some kind of gospel-inflected organ music. Was this to indicate that the mayor, who is African-American, is some kind of stereotypical, Black religious leader-type politician? A Rev. Jesse Jackson or Rev. Al Sharpton type, hmm?

As character development and personality go, this is minute, simple material, but it’s a step-up from recent Scooby-Doo movies. So it’s not just nostalgia that makes me love this movie; Scooby-Doo! Mask of the Blue Falcon is quite good… even if it is not as good as I think it is. And I do want more like it.