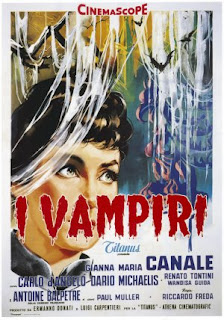 HORROR with elements of drama

Although Riccardo Freda, working under the name “Robert Hampton,” is credited with directing the Italian horror film, I Vampiri, the movie was actually finished by cinematographer Mario Bava after Freda quit the production. I Vampiri has been was first released in the United States as The Devil’s Commandment (1956) and later as Lust of the Vampire (1963).

After a series of young women are found dead with the blood drained from their bodies, the citizens of Paris are calling these the “Vampire Murders.” Inspector Chantal (Carlo D’Angelo) and the French police aren’t the only ones investigating the murders. Pierre Lantin (Dario Michaelis) is a curious journalist determined to solve the murders, but he finds his investigation distracted by the lovely Giselle (Gianna Maria Canale), the niece of Margheita, the Duchess du Grand, who was obsessed with Lantin’s late father.

What Lantin doesn’t know is that back at the Duchess’ castle, mad scientist, Dr. Julien du Grand (Antoine Balpêtré), is draining young women of their blood. When Lorrette Robert (Wandisa Guida), a beautiful student, turns up missing, Lantin follows his suspicions to the Duchess and to the horrifying secret deep in the heart of her castle.

By no means a great film, I Vampiri is a nice introduction to Mario Bava’s ornate style of Gothic horror films. This moody curiosity, which features beautiful dream-like photography and splendid production values, is strangely mesmerizing. Somewhat over the top and yet strangely mannered and staid, I Vampiri is a unique movie treat.

Posted by Leroy Douresseaux at 5:58 AM