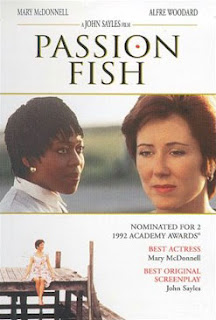 The subject of this movie review is Passion Fish, a 1992 drama from writer-director John Sayles. The film tells the story of a paralyzed soap opera actress and the bond she forms with one of her nurses.

Some would decry that Passion Fish, like most John Sayles films (Matewan, Eight Men Out), lacks precisely that: passion. The truth is that John Sayles films eschew the emotional histrionics that so many filmmakers mistake for emotional honesty. Plus, many directors (American directors are afflicted with this curse) probably think that you have to turn of the intensity to capture the attentions of a jaded audience. Besides, the word “passion” is not a lone adjective in the title, but half of a whole that describes the film’s central theme.

Mary-Alice Culhane (Mary McDonnell, Dances with Wolves), a popular soap opera actress, is left paralyzed and wheel chair bound after a car accident. She returns to her Louisiana childhood home where she runs through a succession of nurses until she meets the fiery Chantelle (Alfre Woodard, Grand Canyon), who is running from her own debilitating sickness. Together, they traverse the narrow road and rough terrain of healing, because, in the end, they are alike and really need each other. In the meantime, they also both find new male friends and companions. Mary attaches to an old-fashioned Cajun (Sayles veteran David Strathairn, City of Hope) and Chantelle to a black Cowboy (Vondie Curtin-Hall, Die Hard 2).

Sayles directs this film with deliberate slowness, a languid pace that mirrors Passion Fish’s sultry and humid setting. He gives his cast a chance to slip into the skins of their roles, and there is a pay off – believable performances and characters that feel right in their environments. His script is full of his sharp wit and his lush and rich dialogue, for which he has deft ear.

The performances are excellent. Although Ms. McDonnell alone earned an Academy Award nomination for performance, Ms. Woodard turns in an exemplary performance as Chantelle, desperately fighting her addiction and desperate to reclaim her child. As a duo, they subtly draw us into their lives, and we can’t help but leave a part of ourselves with them as they chose to remain together – forever or for as long as it takes them to heal.

I can’t stress enough how Sayles builds this movie on good acting and a strong story. For those who like strong characters with which one can identify, this movie has them. Passion Fish is truly a fine film for audiences looking for mature subject matter, and is another delight in the beautiful filmography of a great American independent filmmaker, John Sayles.