"High School of the Dead" Arrives on Neon Alley 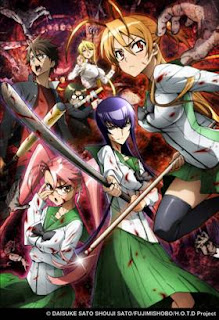 San Francisco, CA, April 18, 2013 – VIZ Media, LLC (VIZ Media), the largest publisher, distributor and licensor of manga and anime in North America, partners with Sentai Filmworks to unleash a frightening new world of the living dead as it premieres the zombie action of HIGH SCHOOL OF THE DEAD on Neon Alley this Friday, April 19th. Episode 1 (English dubbed) of the high-octane anime action series will debut in High Definition at 10PM EST / 7PM PST, replaying at 2AM EST / 11PM PST, and will air again throughout the week. New episodes will premiere every Friday. Check the Neon Alley program guide or NeonAlley.com for more information and additional airtimes.

Based on the ultra-violent manga (graphic novel) originally created by Daisuke Sato, directed by Tetsuro Araki (Death Note, Black Lagoon) and produced by the internationally famed studio MADHOUSE (Death Note, Ninja Scroll, Vampire Hunter D-Bloodlust, Wicked City) HIGH SCHOOL OF THE DEAD (rated TV-MA) is distributed in North America by Sentai Filmworks and combines hordes of flesh-eating zombies with state of the art animation to deliver one of the most action packed anime series ever!

A deadly new disease is ravaging the world, turning the populace into mindless zombies and the number of infected victims is skyrocketing by the second. As their fellow classmates and teachers succumb to the infection around them, a small group of students at Fujimi High School must fight for their lives after surviving the initial outbreak. It’s up to Takashi Komuro to unite the group of weary survivors and try to escape the horrors that surround them. In this new world of the living dead...will they escape?

“HIGH SCHOOL OF THE DEAD is a riveting story that combines plenty of visceral action with compelling, multi-faceted characters and some sexy fan service,” says David Del Rio, VP of Licensing, Sentai Filmworks. “We look forward to the series finding a brand new audience of avid fans on Neon Alley and to viewers joining Takashi Komuro and his cohorts as they face a stark and dangerous world.”

Neon Alley is VIZ Media’s 24-hour, subscription-based anime channel available for the PS3 game console and Playstation® Network, and Xbox 360 and Xbox Live®. The platform features the world’s best titles (dubbed in English and uncut), presented in HD (when available), for a low monthly subscription rate of $6.99, and a limited time only, a one-week free trial is available to all fans that sign up at NeonAlley.com.

Neon Alley is specially designed to be studio agnostic, featuring titles from other anime producers and content distributors, including Aniplex, FUNimation, NTV, Taiseng, and Anime News Network. Members can also share real-time thoughts and status updates using social media technology from Tout (Tout.com), some of which will air on the network.

More information on Neon Alley is available at NeonAlley.com.

Additional information on Sentai Filmworks HIGHSCHOOL OF THE DEAD is available at: http://www.sentai-filmworks.com.

Posted by Leroy Douresseaux at 6:29 AM