Review: "The Sessions" Keeps it Real 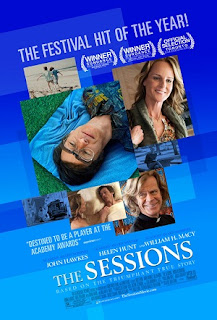 The Sessions is a 2012 drama from writer/director Ben Lewin. The independent film is the story of Mark O’Brien, a real-life poet who was paralyzed from the neck down due to polio. The film is based on the article, “On Seeing a Sex Surrogate,” which was written by O’Brien about the sex surrogate who helped him lose his virginity.

The Sessions opens in 1988 in Berkeley, California where we meet Mark O’Brien (John Hawkes). Mark lives in an iron lung due to complications from polio, which he contracted as a child. Due to his condition, Mark has never had sex. Hunting for someone to relieve him of the burden of his virginity, Mark seeks companionship in the women near to him. After consulting with his priest, Father Brendan (William H. Macy), Mark goes to a professional sex surrogate. Mark meets Cheryl Cohen-Greene (Helen Hunt), a sex therapist and surrogate, who agrees to help him through a series of sessions. This arrangement, however, ends up being, depending on the time and the techniques used, both more and less complicated than either one expected.

There is such overwhelming, beautiful humanity in The Sessions. Writer-director Ben Lewin’s script creates characters that have to be intimate and vulnerable with each other, but not in a contrived way. The actors take what Lewin gives them and make characters that are honestly human by being vulnerable. Vulnerability reveals what is both pitiable and pathetic and also durable and strong, and these are the things that open the characters to the audience. When the audience can go into the characters on such a seemingly intimate level, made-up people can seem like honest-to-God real people, the kind that the audience can’t help watching.

In The Sessions, Hawkes is on the level of Daniel Day-Lewis (who won the best actor Oscar at the 2013 Oscars ceremony), as he transforms himself into another person, not a character, but an actual person. Hawkes’ Mark O’Brien is as real as a fictional character can be. Helen Hunt offers so many levels of conflicted emotions and deeply romantic longings. In her hands, Cheryl Cohen-Greene could actually be the lead in this movie. Hunt makes her such a beautiful soul, so I’m glad that this artist is still a working actress.

There are other fine performances. William H. Macy brings some much needed levity to this film as the acerbic sounding board, Father Brendan. Moon Bloodgood is radiant in a quiet role, full of subtle motions and colors.

Posted by Leroy Douresseaux at 2:03 PM