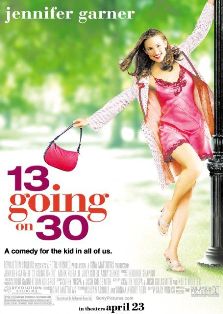 The subject of this movie review is 13 Going on 30, a 2004 romantic comedy and fantasy film from director Gary Winick (Letters to Juliet). The film stars Jennifer Garner as a 13-year-old girl who wakes up as a 30-year-old woman.

Thirteen-year old Jenna Rink (Christa B. Allen) hates her life and hates everybody, so on her 13th birthday, she makes a wish that she was grown up. After playing a game in her closet that came to an unhappy conclusion, she falls asleep as magic dust falls on her head, and later awakens to find that she is a 30-year old, hotshot magazine editor. However, there is a lot about her life that the 30-year old Jenna (Jennifer Garner) doesn’t like. She ignores her parents, steals other people’s magazine ideas, and in one tragic instance with a co-worker’s spouse, she is “the other woman.”

Having a hard time, catching onto her adult life, she turns to the one friend she remembers, Matt Flamhaff (Mark Ruffalo), but in the 17 years since her magical 13th birthday party, she’s ignored Matt. Jenna is as cool and as popular as she wanted to be when she was a kid, and she has lots of expensive clothes and a swanky NYC Fifth Avenue apartment. She is, however, forced to realize that she’s been living the high life of which she has no idea and can’t remember, and that her and Matt went their separate ways long ago. Now, she needs him and wants to be the girl she was when 13-year old Matt (Sean Marquette) was her best friend, but can she rebuild that close relationship in the fortnight before Matt’s impending marriage?

I have not been a fan of Jennifer Garner’s work, neither her body of small film roles nor of the popular TV series, “Alias,” in which she has starred since 2001. That was until I saw 13 Going on 30. The film is a puff piece, a re-imagining of the Tom Hanks favorite, Big (1988), in which Hanks plays a boy who gets his wish (sort of) and his body is transformed to adulthood while his personality and mind remain that of a boy. Plot and concept holes fill 13 Going on 30, such as Jenna forgetting the last 17 years of her life, but pretty much remembering how to edit a magazine. Still, it’s Ms. Garner’s charm and her ability to both summon the personality of a child and to expertly portray the child dealing with adult interpersonal relationships: professional, personal, and intimate. 13 Going on 30 may be a flimsy star vehicle (the kind of soft films in which a studio places a rising star in hopes of raising his star power or testing his star potential), but it’s Jennifer Garner who makes this clunky bucket an attractive program model.