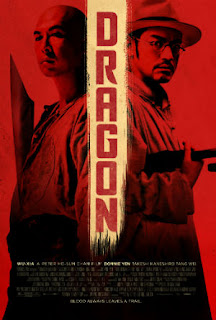 Wu Xia is a 2011 Hong Kong martial arts film and historical drama from director Peter Chan. The film stars Donnie Yen as a sinful man who is leading a new life until his former master and a determined detective begin hunting him. Yen is also the film’s “action director.” Wu Xia, which was originally just under two-hours long, was edited down to 98 minutes and released in the United States as Dragon, late last year (2012).

Dragon is set in 1917 and takes place mostly at Liu Village on the border of Yunnan on the southwest edge of China. Liu Jin-Xi (Donnie Yen) is a village craftsman and papermaker who lives with his wife, Yu (Wei Tang), and his sons, the older Fangzheng (Zheng Wei) and the younger Xiaotian (Li Jiamin). Jin-Xi’s quiet life is irrevocably shattered by the arrival of two gangsters who attempt to rob the local general store.

Jin-Xi stops them, but one of the criminals is the notorious Yan Dongsheng (Yu Kang). Xu Bai-jiu (Takeshi Kaneshiro), a detective sent to investigate the case, is shocked that a local village craftsman could single-handedly stop two hardened criminals, especially Dongsheng, an escaped convict and trained killer. Bai-jiu suspects that Jin-Xi is actually a martial arts master and perhaps, a member of one of the region’s most vicious gangs, the 72 Devils. The detective doggedly pursues the shy villager, but he is unaware that his investigation has drawn the attention of China’s criminal underworld.

For fans of martial arts films, Dragon has many spectacular fights scenes, and some of them are spectacular because they look so odd. But it is all good and also stimulating for lovers of martial arts battles in movies. Sometimes, I found my mind being bended by what I saw, to the point that my imagination seemed inspired by the fighting.

There is, however, an art house sensibility to director Peter Chan’s film, as if Chan refused to allow Dragon to be only fists, fingers, feet, and elbows of fury. Chan takes Oi Wah Lam’s superbly layered script and turns the film into a rumination on nature vs. nurture, the character of the law, and the vigor and influence of human emotions. Chan structures the story in order to ask a few questions. If blood always leaves a trail that one can trace back to a man’s past, then, is that man a slave to the dictates of his blood relations? Is it by tradition, genetics, or both? Is the execution of law more important than acts of humanity? Can man control or alter his emotions?

There is also a mythological strain in Dragon. For its universal father versus son conflict, Dragon offers a sire whose voice and exclamations can rouse thunder, so it is not a stretch to think of the final battle as a brawl between Odin-All-Father and Thor-Son. In fact, this may be the sire-vs.-the-fruit-of-his-loins clash with the most at stake since Darth Vader fought Luke Skywalker over the forest moon of Endor in Return of the Jedi (1983).

Dragon has many excellent performances, but Donnie Yen and Takeshi Kaneshiro are the standouts. As Liu Jin-xi, Yen is a force of nature; physically, he is brilliant – his face capable of assuming and conveying myriad emotions and thoughts. His performance is all outwards, and not internal, so he confronts the viewers and makes them engage with the character he is playing. Kaneshiro as Bai-jiu offers a performance that is more interior. His performance sends out intriguing bits of information about the implacable detective in a way that makes the character as charming as an old friend.

As the director of the film’s action, Yen makes Dragon exhilarating and mesmerizing martial arts entertainment. As the director, Peter Chan tickles the brain, as he tackles dynamic human themes and conflicts. By any name, Dragon or Wu Xia is a dragon, a fire-breathing beast that is too smart to be just another Chinese fight movie.

Posted by Leroy Douresseaux at 5:11 AM