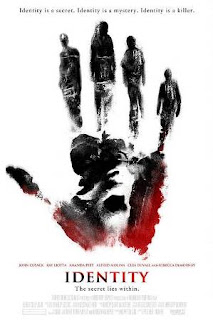 HORROR/MYSTER/THRILLER with elements of crime drama

The subject of this movie review is Identity, a 2003 mystery thriller and psychological horror film from director James Mangold. The film is set at a desolate Nevada motel during a nasty rainstorm. There, ten strangers are stranded and being killed off one by one. It’s actually a very good film until the end.

I often think that suspense thrillers and horror movies don’t have to be great, just effective, although there are great suspense and horror films. The plot and story may be familiar (it usually is), but the execution should make us forget that we’ve seen this before. We should be too busy jumping in our seats or making sure we locked all our doors and windows before the sun went down and we started watching a scary movie. Thus, while What Lies Beneath isn’t a great film, say like Psycho, it’s very well executed and does what it’s supposed to do: make us jump in our seats and feel something akin to the fear that the characters in the story feel. That is what Identity does.

Director James Mangold burst onto the film scene with the heartwarming and heart-wrenching drama Heavy, and entered the big time with Copland, wherein which he drew a very good performance from Sylvester Stallone. Identity is his first film that tackles the suspense/horror genre, and it’s a mighty good first leap.

Through the vagaries of coincidence, ten strangers are stranded at an isolated hotel during a nasty storm. As they begin to know each other, they discover that someone, either one of them or an unknown person, is killing them off one by one. As the most likely suspects are knocked off, the survivors are further confused when the bodies of the dead begin to disappear.

Writer Michael Cooney, the mastermind behind the Jack Frost films, creates what you could call a typical, professional Hollywood script, especially for a suspense film. The story has the usual clues and subtle tricks that you have to catch in order to learn the identity of the “bad guy.” It has the usual “bumps in the night,” an isolated setting for the story, the duplicitous characters, and enough false positives to scare off any pro football team. This is very good, if not spectacular work.

The strength of the film is in its cast and in its director. John Cusack is, as ever, very good as the leading man, and especially good in this case, as the smart guy trying to figure things out. Ray Liotta continues to shine in whatever roles he takes; everyone just seems to take him for granted. Mangold makes Identity part Alfred Hitchcock and a little slasher film. He’s subtle, even when the story seems to go over the top, as he takes advantage of Cooney’s suspense thriller settings: the lonely stretch of highway, the isolated motel, the overbearing and claustrophobic rainstorm, and the characters who come in all colors: shady, sneaky, weird, mental, dangerous, dishonest, weak, and angry. Mangold lets the cast run wild with these characters. He simply and quietly follows them, his camera greedily drinking what he’s carefully staged. It seems like zany and scary fun done with abandon, and while it is, Mangold knew what he was doing. He knew the buttons to push, and he knows where to take the story, every inch of the way, every scene in its place to give us the same sense of panic, fear, and growing desperation that his characters feel.

I had hoped that Identity would be fun and it was – good, spooky fun. When the story reveals its big secret, it does knock the steam out of the film, ruining the fun…almost. With the grace and athletic skill of a Kobe Bryant or Tracy McGrady, the film gets back on its feet for an ending that at least slaps you in the face if it doesn’t exactly bunch you in the stomach. Early in the film is a clue as to the killer’s identity. I ignored it, because a later scene corrected what seemed like a mistake when one character wrongly accuses another. That later scene was wrong and was a trick to throw us off. So pay attention to every step you take on this creepy trip.