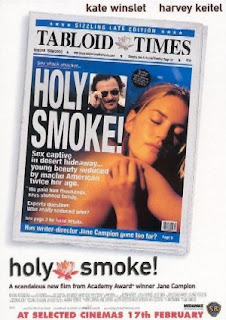 The subject of this movie review is Holy Smoke!, a 1999 Australian comedy-drama from director Jane Campion. The film stars Kate Winslet as an Australian tourist who falls in with an Indian guru and Harvey Keitel as a macho American deprogrammer hired to free her from that new spirituality.

Jane Campion won an Academy Award in 1994 in the category original screenplay for her 1993 film, The Piano. Whereas both the characters and the story were well written in that internationally acclaimed film, the same cannot be said of Ms. Campion’s Holy Smoke, which is not nearly as rich a film as The Piano.

When a young woman (Kate Winslet) falls under the influence of a charismatic guru and joins his ashram, her parents hire PJ Waters (Harvey Kietel, who also starred in Ms. Campion’s The Piano), an “exiter,” a counselor who specializes in deprogramming people taken in by cults. PJ, however, finds the young woman, Ruth Barron, to be not only iron-willed and intelligent, but also very sexy. Ruth engages PJ is an intense battle of wills and sexual politics that begs the question – who will win?

Ms. Winslet is nothing short of stunning in Holy Smoke, and the continual growth of her acting talent is a revelation. It’s hard to take your eyes off her, and she is so beautiful. Ms. Winslet is not one of those tiresome and too thin anorexia stars, but a big boned, baby-got-back-and-front, full figured, blond goddess. The combination of her acting prowess and raw sexuality will distract from a dull movie, and Holy Smoke, while not quite awful, needed this Meryl Streep with a body.

The film is just too up and down. It is at times funny and engaging, but at other times too dry and pointless. The other characters are quite interesting, but the screenwriters ignore them in favor of a drawn out battle between Ruth and PJ. That’s a shame because many of the other characters, including Ruth’s parents and PJ’s partner played by Pam Grier, seem to have interesting backstories. The film limps to the finish line with a tired battle of the sexes. Thankfully, a sentimental dénouement saves the film from being completely below average.

Posted by Leroy Douresseaux at 8:13 AM