Review: "Bulletproof Monk" Not a Misfire 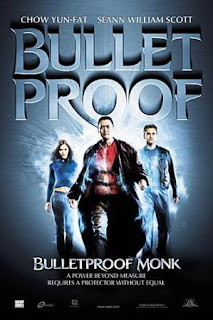 MARTIAL ARTS/ACTION with elements of adventure, fantasy, and sci-fi

The subject of this movie review is Bulletproof Monk, a 2003 martial arts and fantasy film starring Chow Yun-Fat and Seann William Scott. The film is a loose adaptation of a three-issue comic book miniseries published in the late 1990s.

After I first saw trailers and television commercials for Bulletproof Monk, I was sure that the movie was going to be a giant turkey bomb. The fights looked like cheesy, Matrix, bullet time, rip-offs, and the idea of a kung-fu mentor looking for a “chosen one” rang all too familiar. Worst of all, the film had Chow Yun-Fat spouting instant pudding Far East mystical mumbo-jumbo. The ads turned out to be quite misleading (in fact, those responsible shouldn’t necessarily lose their jobs if this film flops because of poor ads, but they should, at least, get demerits from their bosses), and the film is quite good, although the film still has one of those chosen one characters and lots of mystical quasi-Buddhist wisdom dialogue that even fortune cookie makers wouldn’t touch.

Somewhere in Tibet is an ancient scroll wherein is written the secrets to great power. Every sixty years, a new monk is chosen via prophetic signs to protect the scroll. In 1943, the Monk with No Name (Chow Yun Fat, Crouching Tiger, Hidden Dragon) takes responsibility for the scroll. 60 years later, the monk is in New York running from Strucker (Karel Roden), a sadistic Nazi holdover from the Forties who wants the secrets of the scroll. His granddaughter Nina (Victoria Smurfit) now leads the chase to capture the Monk with No Name. During one of those chases, the monk meets Kar (Seann William Scott), a young pickpocket who just so happens to possesses some formidable martial arts skills. Of course, the relationship between the two begins as an edgy one, but soon it’s sometimes difficult to tell who is the mentor and who is the “mentee.”

Director Paul Hunter, known for his music videos, shows great ability in creating a sustained rhythmic style in Bulletproof Monk. The material is old hat; Hunter just makes the film exciting and energetic. He creates a sense of drama, suspense, mystery, and intrigue through the flow of the film. He even stages the mystical and philosophical musings so that they seem interesting and move the story forward. Rather than just being the standard dialogue you’d hear in a martial arts flick, the wit and wisdom of the monk actually serves the story.

The acting is good. Fat has never seemed more comfortable and relaxed in an English language film than he does here. He’s the coolest silent, stoic hero since Clint Eastwood, and the camera loves him. There’s just something heroic and, well, mystical about his visage when it appears on a giant movie screen, and like Eastwood, his best work needs to be seen in a theatre. Seann William Scott, forever burdened with the Stifler character from the American Pie films, proves himself to be a screen idol in the mold of Keanu Reeves. Like Reeves, the camera loves Scott; he has a naïve and goofy, but charming look that can sell him as a part time rogue, but a rogue destined to be a hero. His performance and his character’s transformation really remind me of both Reeves performance and of the character Neo’s transformation in The Matrix.

Bulletproof Monk is pure fun and very entertaining. You don’t have to check your brain at the door because the film isn’t that simpleminded. There’s chemistry between the leads that is actually heartwarming and inspiring. The evolution of the teacher/pupil relationship here is one that rings true. They are the center of the story, and when their dynamic works and the fight scenes are good, then, the movie is probably good.

Bulletproof Monk does have some shaky moments, and sometimes, the characters don’t always ring true. The villains are such stock characters that the actors precariously balance appearing both pathetic and dangerous, although Ms. Smurfit plays her part with absolute relish. Still, Bulletproof Monk is a good action film with some excellent fight scenes in the spirit of The Matrix, and the soundtrack is also pretty cool.

Though I do wonder why, after centuries of having Asian protectors, the protectors of the scroll all of a sudden have to be white people. Would predominately white audiences accept Jet Li as King Arthur?