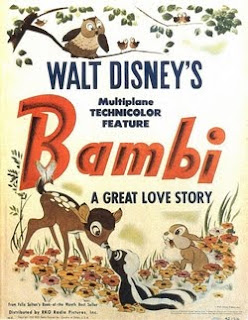 Walt Disney recently released its classic, 1942 animated feature, Bambi, on Blu-ray for the first time. Since I hadn’t watched Bambi in well over a decade, I decided to see it again, because I wondered if it would hold up to my initial high estimation of the film. It held up; it super duper held up.

Adapted from novel, Bambi, A Life in the Woods by Austrian author, Felix Salten, Bambi tells the story of a white-tailed deer named Bambi, who is destined to one day be the Great Prince of the Forest. Bambi befriends Thumber, a rambunctious pink-nosed rabbit; a skunk Bambi names Flower; and Bambi’s childhood friend and future mate, a deer named Faline. The young animals frolic and play, learn to survive, and discover how to adapt to the changing of seasons. Tragedy strikes when humans enter the woods, and suddenly, life becomes as precarious as it is beautiful.

What Pixar does in its 3D or computer animated films seems miraculous. Pixar’s films are beautiful, and Walt Disney’s 1990 animated features are spectacular. Still, they fall short of the artistry on display in Walt Disney’s early feature films like Snow White, Pinocchio, and Bambi (among others). Without the computers and technology of today, Walt Disney’s animators, artists, and filmmakers created animated films of soaring quality and of astonishing heart and sentiment.

Look at the impeccable character animation, velvety movement of characters and objects, and the verdant pastoral backdrop and be amazed that the animation is hand-drawn and the backgrounds are hand-painted. I am not overstating things when I say that Bambi is a work of art. It is museum-quality art. It is the art of the Old Masters transformed into animated film.

Through the years, this film has enthralled children, and Bambi will always hold a special place in their hearts. People like me who see the film for the first time as an adult are stunned. The love, joy, terror, excitement, and pride the animal characters exhibit is so real. When the film depicts the terror Man’s encroachment into the forest evokes in the animals, I also feel it.

1948 Golden Globes: 1 win: “Special Award” (Walt Disney for furthering the influence of the screen and for the Hindustani version of the movie)

Posted by Leroy Douresseaux at 11:33 AM