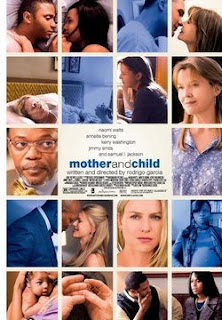 Mother and Child is an ensemble drama film released in 2010, after premiering at the 2009 Toronto International Film Festival. Focusing on the complications and complexities of motherhood and adoption, the film is poignant, powerful, and even beautiful. It is also sometimes grueling to watch.

Mother and Child opens almost 40 years earlier on a scene in which a 14-year-old girl prepares to have sex with a teen boy. She gets pregnant and later gives up her baby for adoption. 37 years later, we learn that the baby is Elizabeth Joyce (Naomi Watts), a high-powered attorney returning to Los Angeles, the place of her birth. Elizabeth takes a job at a law firm owned by a man named Paul (Samuel L. Jackson). Elizabeth begins an affair with Paul, but this is but one affair of many for a woman who uses her sex appeal to have the upper hand in situations in which she does not have control.

Meanwhile, her birth mother, Karen (Annette Bening), is a 50-something physical therapist still riddled by the guilt of giving up her baby. Although initially resistant, she begins a relationship with Paco (Jimmy Smits), a co-worker who seems to be therapeutic for Karen. At the same time, a small businesswoman, Lucy (Kerry Washington), and her husband, Joseph (David Ramsey), begin the process of adoption. However, the birthmother, a difficult young woman named Ray (Shareeka Epps), interrogates Lucy and seems hostile to Joseph.

Top to bottom, Mother and Child is filled with splendid acting, and there isn’t an actor, regardless of the size of his or her part, who does not deliver the kind of first-class performance that a professional actor should always give. Naomi Watts, Annette Bening, Sam Jackson, and Shareeka Epps give distinctive performances that add both surprising nuance to a film that rages with dark emotions and strong feelings (particularly anger, bitterness, and regret).

Writer and director Rodrigo García composed a sumptuous screenplay rich with characters and vivid characterizations. It is Garcia’s directing, however, that is the star here, as he gives his actors the space they need to develop these characters and to deliver on the characters’ promise without slowing the film.

Still, there are moments in Mother and Child that feel contrived and overwrought, as if Garcia doesn’t trust his cast to deliver or his audience to understand his film, which is as spiritual as it is dramatic. Garcia captures how vulnerable people are when they open themselves to relationships, and he accurately depicts the bitterness people feel over perceived betrayals. Sometimes the raw emotions are too much to bear (or watch). As good as this film is, and Mother and Child is exceptionally good, I sometimes got a feeling or a notion that things were a little overdone. But don’t let that keep you from seeing one of 2010’s very best films.