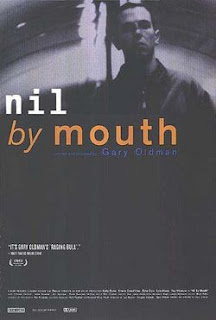 Nil by Mouth is acclaimed actor Gary Oldman’s directorial debut. It’s what I call “cinema de unflinching,” in particular that “cinema’s” sub-genre “film de raw.” Oldman, an extremely talented actor who can simultaneously bury himself in a role and also exude movie star wattage, composed a film that stands as one of the most powerful family dramas of the 1990’s because of its dogged pursuit of portraying the effects of drugs and alcohol on a poor family in notorious South London.

Ray (Ray Winstone) is a coke snorting, alcoholic bully who brow beats his wife Valerie (Kathy Burke) and his brother-in-law, Billy (Charlie Creed-Miles), who lives with the couple. After Raymond savagely attacks Billy and kicks him out of the apartment, both men spiral downward, as Ray drinks more and becomes more paranoid and Billy does little other than feed his dope habit. Meanwhile, Val and the rest of the women in the family valiantly hold the family together and look for a few good times in a drug-addled world of poverty and crushing of claustrophobia.

The film starts off quite slowly, and I am certain that it will be difficult for many non-Brits to understand the London dialects (as it was for me). Still, the acting is good, quite good, actually. Oldman gives this film a good pace and a high level of intensity, considering that this film is heavy with the kind of dialogue that reveals character. However, when Nil by Mouth bogs down on a plot point, it is almost anal, and I occasionally found myself drifting away from it. Nil by Mouth is raw and unflinching, but it did not always hold my attention. Still, the script is well-written and well thought out; when you consider the movie as a whole, the screenplay seems rather brilliant.

All in all, Nil by Mouth is a satisfying and rewarding film viewing experience. Oldman makes the right choice in terms of satisfying the audience by letting his film family work through their difficulties. Rather than call it a Hollywood ending, I’ll describe it as artfully handled.