"Due Date" is Good Product 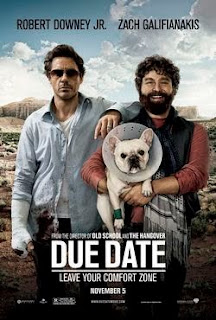 Due Date is a comedy and road movie from Todd Phillips, the director of The Hangover. It is the story of a high-strung father-to-be forced to hitch a ride with an oddball wannabe actor if he wants to make it to the birth of his first child on time. While it isn’t nearly as funny or as outrageous as The Hangover, Due Date is entertaining and offers some pretty hysterical moments of its own.

Architect Peter Highman (Robert Downey Jr.) is on his way home from Atlanta to Los Angeles when he has an unpleasant encounter with another flyer, aspiring actor Ethan Tremblay (Zach Galifianakis), who is also going to L.A. Peter and Ethan’s meeting ends up with Peter being placed on the No Fly List. Desperate to get home for the impending birth of his child, Peter is forced to accept Ethan’s offer to hitch a ride with him and his dog, Sonny, cross-country. Thus begins a road trip to hell – the most agonizing, frustrating, terrifying, and physically painful journey of Peter’s life.

Due Date reminded me of another comedy road movie featuring a mismatched pair, Plains, Trains, and Automobiles (1987), the surprisingly poignant film starring Steve Martin and the late John Candy and directed by the late John Hughes. Due Date does have oddly touching moments, but the film really doesn’t deliver on the talents of the people involved, especially Downey, Galifianakis, and director Todd Phillips. It is a mixed bag. Sometimes, it is an action movie; other times, it is a raunchy comedy, and a few times, the film throws out some emotional moments. Due Date is funny, but for the most part, it just feels like big time Hollywood product. It entertains, delivering with the same reliability of an unspectacular Big Mac. Due Date is just average.