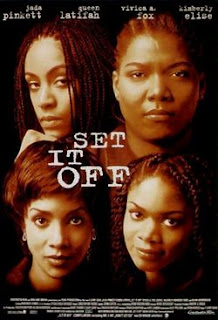 Set If Off, the second film from music video director F. Gary Gray, was almost the best film ever made about the plight of impoverished African-American women at the turn of the century. Instead, the filmmakers settled on making a film that is a decent drama and a cathartic action movie. Part western and part girl movie, Set If Off resonates with the pain of these female characters although the film only scratches the surface of who the characters are.

After some neighborhood acquaintances of Francesca “Frankie” Sutton’s (Vivica A. Fox) rob the bank where she works and kill a few people, her supervisors at the bank fire her because they find the fact that she knew the culprits disturbing. Her diligence and hard work (only a day prior, she’d counted $240,000 by hand to help one of her bosses) don’t matter one bit. Detective Strode (John C. McGinley), the lead detective in the case, also considers her to be in cahoots with the robbers.

Lida “Stony” Newson (Jada Pinkett) has been plans for her brother Stevie (Chaz Lamar Shepard) to attend UCLA. Stevie is a friend of one of the bank robbers. He visits him after the robbery, and a pack of cowardly, punk cops murders Stevie when they mistake him for the bank robber. Thinking Stevie has a gun, they shoot him down like a dog, only to discover that he was trying to show them that all he had in his jacket was a bottle of champagne a friend had given him for his birthday.

Tired of being on the beating end of the stick, Stony and Frankie join two other downtrodden friends, Cleopatra “Cleo” Sims (Queen Latifah) and Tisean “T.T.” Williams (Kimberly Elise, in a sparkling debut), as bank robbers themselves, to make a little money to get ahead in life and to stick it to the evil, white tyrants who go out of their way to oppress a sister.

This movie could have been so much more than it ended up being, maybe an intense urban drama about what these young women go through and the ends they meet when they finally lash out (perhaps blindly and unwisely) at the world for their pain. However, I will review this movie for what it is. The drama is about average. I caught on to what the story was about; I felt the sisters’ pain. Still, other than Stony, the film mostly relegates the characters to being ciphers, and the script only skims the surface of Stony’s character, for that matter. The filmmakers feel compelled to spend much of the film’s time detailing the intricacies and violence of bank robbery, and they do that quite well. As robbers, the four women are clumsy, but they’re raw and eager. Their crimes are swift and abrupt, and Gray presents it all in a bracing fashion in which the camera lovingly follows the ladies’ every move.

I wanted this film to be more, but, honestly, I really enjoyed what I got. The drama, as mishandled as it was, it still touching and visceral, and the action had me cheering my girls every step of the way. As things fall apart for them, I couldn’t help but feel the emotions and bond they shared, both strong enough to make them sacrifice for one another.

The acting is also quite good. This was a breakthrough role for Queen Latifah, who is full of snarling and barely checked rage; the camera loves her. Ms. Pinkett easily revealed the depth of her talent as a strong dramatic actress, but this performance didn’t earn her lots of new roles, being of the jigaboo persuasion. Ms. Fox’s character barely registers, but that’s the fault of the script. This was a good start for Ms. Elise; her large expressive eyes make her a film natural in her ability to convey feelings.

For all its shortcomings, Set It Off is a very good film, and we need more like it, albeit of a higher quality, that detail the hard lives of poor people and their willingness to fight back when they need to. See this film, and then watch it again.