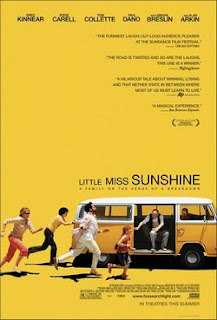 Seven-year old Olive Hoover’s (Abigail Breslin) deepest wish is to compete in the Little Miss Sunshine pageant in Redondo Beach, CA. Schedules and financial issues compel her parents: her mother Sheryl (Toni Collette) and her father Richard (Greg Kinnear), who is struggling to take his motivational seminar national, to make the trip from their home in New Mexico to California in a VW bus. The trio won’t be alone, though; the rest of her odd clan is coming along on this stressful road trip. That includes her heroin snorting Grandpa (Alan Arkin), her suicidal, gay uncle, Frank (Steve Carell), and her brother, Dwayne (Paul Dano), who has taken a vow of silence until he attains his dream – the Air Force Academy. Along the way, the Hoovers must learn to deal with their broken dreams, heartaches, and the broken-down VW bus. It’s the only way they’ll learn to accept themselves for who they are and to give each other the support that helps to overcome the challenges on the path of life.

Steve Carell’s hit NBC comedy, “The Office” resonates with audiences not because its portrayal of the working life in a corporate office is necessarily real, but because it captures the spirit of absurdity and idiocy that often thrives in the office space. Carell is also part of the ensemble cast of the film, Little Miss Sunshine, and perhaps, this movie resonates with audiences and critics not because it is a realistic portrayal of the nuclear and extended family (though the script does take verisimilitude to the next level). Little Miss Sunshine captures in its spirit the irritation, aggravation, and disappointments of being in a family while simultaneously capturing the essence of what makes being in a family so damn cool when it works right.

This charming little film gets it right from top to bottom – character, plot, setting, and concept. In fact, the Hoovers’ odyssey on that little VW bus and how they have to work together to make it run long enough to get them to the pageant and back is a metaphor for the hard won teamwork that it takes to keep a family in working order and working together – especially when it often seems that by every right it should be broken into hundreds of little pieces. Little Miss Sunshine doesn’t laugh at the family or their drama. Instead, it reveals the creamy inside of the family’s tough exterior through dry humor – the kind the family uses to deal with itself.

Little Miss Sunshine is also a superbly cast film because it has a superb cast. They hit their marks, and they get their moments right. Each actor knows that he or she has scenes scattered throughout the film when it’s up to the individual to not only sell his or her character, but to also sell this movie. From Steve Carell’s Frank having a run-in with a lover who spurned him to Abigail Breslin’s moment to make Olive shine at the pageant, this cast hits a home run or at least gets an extra base hit. It’s hard to find an ensemble cast that outshines them this year.

Little Miss Sunshine sometimes offers pat resolutions, but those are the sweetest pats of butter around. Sometimes, the actors seem too earnest and overact in making their characters weird and troubled. This flick, however, is filled with black humor, and ultimately, its seeming ease at reaching a resolution is hard fought. They show us the dark side of family, but it’s sweet as dark chocolate, and the aftertaste is one we’ll enjoy. Hooray to directors Jonathan Dayton and Valerie Faris who saw the magic in Michael Arndt’s script and spun gold cloth from it, and bravo to the fates for giving us an enchanting cast to bring it all to life.