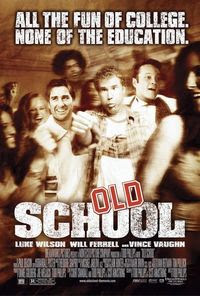 When Mitch Martin (Luke Wilson) discovers that his girlfriend (Juliette Lewis) participates in group sex, it shatters his life. Under the guise of helping Mitch, his friends Bernard “Beanie” Campbell (Vince Vaughn) and Frank Ricard (Will Ferrell) hatch an idea to start their own fraternity so that they can relive the wild lives they lost when they got married. Of course, Martin reluctantly allows them to use his new house (conveniently located near a college campus) to stage their hijinks. It might be a bad idea for a number of reasons (and a good idea for a movie), not the least of which is that Mitch has his eyes on Nicole (Ellen Pompeo). Mitch had a high school crush on Nicole; she’s attracted to him, but finds their sorority boy activities immature.

Old School is very funny, and I laughed in spite of how dumb this movie is. It would have been even funnier if the movie hadn’t sold out in the end. The kind of guys that go to see a movie like this want the full raunchiness, but this movie plays it safe. By the end of the film, the horny thirty-somethings all return (for the most part) to their domestic tranquility without a notch on their belts to show for their wild times. I know that a lot of (stupid) people feel that movies should validate the American bourgeois’ value system, but this is a frickin’ comedy, and a lowbrow comedy at that, so all bets are off. Let there be no sacred cows; let the husbands screw around on their wives. This isn’t supposed to be smart and life affirming. If it were supposed to be intelligent, Old School wouldn’t have as a character one of the most tired stereotypes of film comedies set on college campuses, the evil dean of students (Jeremy Piven).

The scene I most anticipated was the one in which Vince Vaughn’s Beanie Campbell, who so wants to have sex with a co-ed, in spite of his alleged devotion to his wife and two young boys, would finally get a young lass alone with him in his room. What does Beanie do when he gets time with a co-ed? He chickens out, although the girl is quite willing. Still, a film like this is supposed to provide the yucks and lots of vicarious thrills. Beanie should have screwed her brains out. In fact, after that scene, the Beanie character loses all the intensity he had early in the film. Even Luke Wilson’s Mitch commits to a “serious relationship” by film’s end (in a very pat and neatly wrapped dénouement).

I recommend Old School for its many moments of awesome hilarity, but I pity the filmmakers for their lack of balls. This could and should have been so much funnier, so much more rebellious, and so much more subversive.