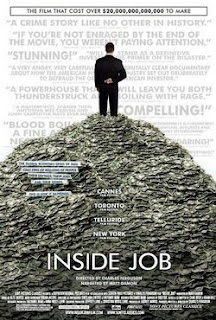 At the recent 2011 Academy Awards ceremony, Inside Job won the best documentary feature Oscar. Directed by Charles Ferguson (No End in Sight), Inside Job is about the financial crisis of 2007-2010. It provides a comprehensive analysis of the financial services industry’s systematic corruption of the United States. The film also looks at the subsequent consequences of that corruption: millions of people losing their jobs and homes, the worst recession since the Great Depression, and a near collapse of the global financial system.

Ferguson uses thorough research of financial issues and extensive interviews of key financial insiders, politicians, journalists, and academics. The director paints a portrait of a rogue industry that relies on powerful insiders to control government regulation of itself. Insiders in politics and academia also help to shape the financial services industry’s flow of information to the public. Filmed mostly in the United States, Inside Job connects the dots by visiting Iceland, England, France, Singapore, and China, where we see unemployment, foreclosed homes, shuttered factories, and tent cities for the homeless.

As he did in the excellent No End in Sight, Charles Ferguson presents a dizzying array of interviews, information, history, and even a few reluctant talking-head types as he explains how we got to the derivatives market, what that market did, and how we got to our current financial recession and malaise. Watch this film and Ferguson will make it clear that the financial crisis was an inside job because all the players: CEOs, corporate board members, banking chieftains, government regulators, Presidential cabinet appointees, university economic professors and directors, etc. are all insiders; they rig the system and suck up all the cash for themselves. We live outside their little world, but what they do can and often does harm our larger world.

Two things about this movie stand out. First, the movie informs us that, thus far, no one has gone to jail for causing the financial crisis. Secondly, Matt Damon’s narration of Inside Job transforms the film from mere documentary into a gripping account that is part journalism, part storytelling, and all take-down of the financial services and its overeager servant, the U.S. government.

Most of all, Inside Job is simply a great movie.