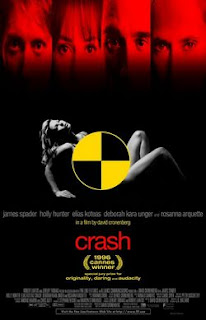 After being seriously scarred in a near-fatal collision (that was his fault and cost a man his life), television director James Ballard (James Spader) finds his soul mate in Dr. Helen Remington (Holly Hunter), fellow crash survivor and wife of the man killed in the accident. Anxious to connect with the widow, Ballard joins Dr. Remington in a study of cars, sex, and death in which they focus on the point where the three meet. Together, with a band of misfits that include Ballard’s wife, Catherine (Deborah Kara Unger), and Vaughn (Elias Koteas), a fetishist who recreates and eroticizes famous car crash deaths (James Dean and Jane Mansfield’s seem to be his favorites), they probe the eroticism of the automobile and the sexual violence of auto accidents.

To call David Cronenberg’s Crash “weird” would be kind of dumb and simple. To call it an obtuse art project would be close. The film continues Cronenberg’s look at the effects of technology, in this case machines, in particularly the automobile, on the human body. The film seems to take place in the near future, sort of a tomorrow or the day after that. Sensations increasingly have become the method of communication between humans, and mechanical things intrigue people, in particularly how they can be an extension of the human body and also extend perception of or enhance sensation. Cronenberg gives us lots of sex scenes that involve cars, car crashes, and death as aphrodisiacs.

Those who like film as art with an emphasis on the visual sensation or the visual communication of film will find interest in this. However, Crash too often comes across as a boring exercise in creating mildly disturbing images. Sometimes, those images are disgusting, but in a way that makes you roll your eyes. Still, Cronenberg is, as always, daring in the way he challenges audiences to come with him as explores the darker side of humanity merging with machinery.