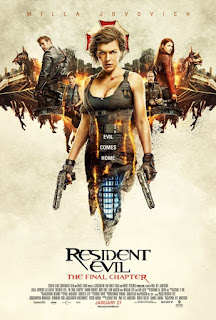 Resident Evil: The Final Chapter is a 2017 science fiction, action, and horror film from writer-director Paul W.S. Anderson.  It is the sixth installment in the film franchise based upon the Capcom survival horror video game series, Resident Evil.  This film is a direct sequel to the fifth movie, Resident Evil: Retribution.

Resident Evil: The Final Chapter opens with a history of the Umbrella Corporation, its founder, Dr. James Marcus (Mark Simpson), and his daughter, Alicia Marcus (Ever Anderson), a girl dying of premature aging.  This company and the father and his daughter are the catalysts for the creation of the “T-virus,” which creates a plague that has turned most humans into the flesh-eating zombies.

Three weeks after the events depicted in Resident Evil: Retribution, Alice (Milla Jovovich) awakens in the ruins of Washington D.C.  While searching the city, Alice is contacted by her nemesis, the Red Queen (Ever Anderson), who has an offer for Alice.  If she returns to the site of Raccoon City, where the T-virus plague began, Alice will find an airborne anti-virus that will kill every organism infected with the T-virus.  Standing in her way is Dr. Alexander Isaacs (Iain Glen), co-owner of the Umbrella Corporation, and the fact that Alice's body also contains the T-virus.

I wouldn't quite say that Resident Evil: The Final Chapter is “saving the best for last,” but it is as good as the original 2002 film and the 2010 fourth film, Resident Evil: Afterlife, the two previous high water marks in the Resident Evil film series.  This new film is visually close to Resident Evil: Apocalypse (the second film) and Retribution, but, in terms of Alice as an action hero, is like Resident Evil: Extinction (the third film).

If I am honest with you, dear reader, I have to admit that I really enjoyed Resident Evil: The Final Chapter because it is an Alice-kick-butt movie.  It's stripped-down and lean-and-mean, even with all its CGI set pieces.  The film focuses on Alice kicking butt and killing with her guns, knives, hands, and anything she can turn into a weapon of individual destruction.  There are supporting characters, like Ali Larter's Claire Redfield, but this is not the ensemble film that most of the previous films were (to one extent or another).  I like this film's mostly tight focus on Jovovich/Alice, and it seems as if this was really the first time that we saw Alice's potential play out fully.

Resident Evil: The Final Chapter is writer-director Paul W.S. Anderson's love letter to fans of this film series, especially those of us who have loved every minute of Milla Jovovich as Alice.  Even when the Resident Evil movies were not at their best, Jovovich was always in fine form.  I guess one might say that Resident Evil: The Final Chapter is also Anderson's love letter to Jovovich, who has been his wife since 2009.  As far as I'm concerned, I would like more Anderson-Jovovich love letters.


The text is copyright © 2017 Leroy Douresseaux. All Rights Reserved. Contact this site for reprint or syndication rights and fees.

Posted by Leroy Douresseaux at 9:13 AM