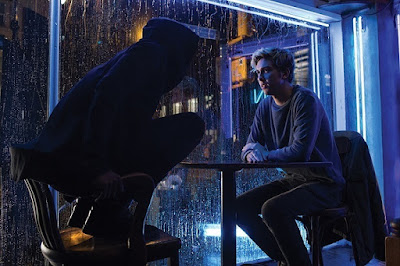 San Francisco, CA - VIZ Media, LLC (VIZ Media), the nation’s premier manga and anime company, will be featuring top titles from its broad catalog at the upcoming Licensing Expo 2017. This year, the top highlighted property for merchandising opportunities will be the live action feature film Death Note, streaming globally Summer 2017 on Netflix. VIZ Media will be located in Booth #J236.

VIZ Media publishes the dark and edgy DEATH NOTE manga and anime the film is based on. Both have been continual bestsellers since their debut in the mid 2000’s, captivating millions of fans around the world. The Death Note film will debut globally on August 25, 2017, exclusively on Netflix, and the adaptation is directed by Adam Wingard, starring Nat Wolff, Lakeith Stanfield and Margaret Qualley.

In addition to Netflix’s live action Death Note, VIZ Media will be highlighting the following flagship titles at the show this year:

Netflix Original Film Death Note
Based on the famous Japanese manga written by Tsugumi Ohba and Takeshi Obata, Death Note follows a high school student who comes across a supernatural notebook, realizing it holds within it a great power; if the owner inscribes someone’s name into it while picturing their face, he or she will die. Intoxicated with his new godlike abilities, the young man begins to kill those he deems unworthy of life.

DEATH NOTE Anime (Rated ‘TV-14’)
Light Yagami is an ace student with great prospects- and he’s bored out of his mind. But all that changes when he finds the Death Note, a notebook dropped by Ryuk, a rouge Shinigami death god. Any human whose name is written in the notebook dies, and now Light has vowed to use the power of the Death Note to rid the world of evil. But when criminals begin dropping dead, the authorities send the legendary detective L to track down the killer. With L hot on his heels, will Light lose sight of his noble goal… or his life?

NARUTO SHIPPUDEN (Rated ‘TV-14’)
Created by Masashi Kishimoto, NARUTO was first introduced in Weekly Shonen Jump magazine in Japan in 1999 and quickly became one of the most popular manga properties. The manga series (rated ‘T’ for Teens, in print and digital editions) and animated counterpart (NARUTO and NARUTO SHIPPUDEN) are some of VIZ Media’s most successful titles and have captivated millions of fans across North America, Europe and South America.

ONE-PUNCH MAN (Rated ‘TV-14’)
Nothing about Saitama passes the eyeball test when it comes to superheroes, from his lifeless expression to his bald head to his unimpressive physique. However, this average-looking guy has a not-so-average problem – he just can’t seem to find an opponent strong enough to take on! Every time a promising villain appears, he beats the snot out of ’em with one punch! Can Saitama finally find an opponent who can go toe-to-toe with him and give his life some meaning? Or is he doomed to a life of super-powered boredom?

HUNTER X HUNTER (Rated ‘TV-14’)
Hunters are a special breed, dedicated to tracking down treasures, magical beasts and even other people. But such pursuits require a license, and less than one in a hundred thousand can pass the grueling qualification exam. Those who do pass gain access to restricted areas, amazing stores of information and the right to call themselves “Hunters.” Can Gon, a country boy, follow his father and join their ranks?

BLEACH (Rated ‘TV-14’)
Ichigo Kurosaki was born with the ability to see ghosts. When his family is attacked by a Hollow – a malevolent lost soul – Ichigo encounters a Soul Reaper and absorbs her powers. Now he has dedicated his life to protecting the innocent and helping the tortured souls find peace.

For more information on these or other award-winning anime titles from VIZ Media, please visit VIZ.com.

Posted by Leroy Douresseaux at 5:01 PM