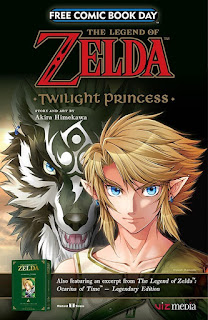 Visit And Support Local Comics Retailers On May 6th To Receive

VIZ Media announces its participation and sponsorship for Free Comic Book Day 2017, with a pair of special FREE manga samplers that will include excerpts from the company’s new THE LEGEND OF ZELDA: TWILIGHT PRINCESS series and the definitive THE LEGEND OF ZELDA: LEGENDARY EDITION – OCARINA OF TIME release as well as a second sampler containing excerpts from the Shonen Jump action series BORUTO: NARUTO NEXT GENERATIONS and DRAGON BALL SUPER.

Scheduled to take place on Saturday, May 6th, 2017 at thousands of locations nationwide, Free Comic Book Day is an annual promotional campaign developed by the North American comic book industry to help bring new readers of all ages and interests into independent comic book stores. Free Comic Book Day (FCBD) began in 2002 and is coordinated by the industry's single largest distributor, Diamond Comic Distributors. Readers should visit freecomicbookday.com to find local participating retailers in their area.

VIZ Media participates this year as both a Gold and Silver Level Sponsor with the following FREE exclusive releases (available while supplies last).

THE LEGEND OF ZELDA FCBD 2017 SAMPLER
A special Gold Level Sponsor sampler containing excerpts from the new THE LEGEND OF ZELDA: TWILIGHT PRINCESS (rated ‘T’ for Teens) series and also THE LEGEND OF ZELDA: LEGENDARY EDITION – OCARINA OF TIME (rated ‘A’ for All Ages). Both series are inspired by the beloved Nintendo® role playing, puzzle-solving, action video game property.

In BORUTO: NARUTO NEXT GENERATIONS (rated ‘T’ for Teens), Naruto was a young shinobi with an incorrigible knack for mischief. He achieved his dream to become the greatest ninja in his village, and now his face sits atop the Hokage monument. But this is not his story... A new generation of ninja are ready to take the stage, led by Naruto's own son, Boruto! Don’t miss this action-packed excerpt!

In DRAGON BALL SUPER (rated ‘T’ for Teens), ever since Goku became Earth’s greatest hero and gathered the seven Dragon Balls to defeat the evil Boo, his life on Earth has grown a little dull. But new threats loom overhead, and Goku and his friends will have to defend the planet once again in this continuation of Akira Toriyama’s best-selling series, DRAGON BALL!

For more information on these and other manga titles published by VIZ Media, please visit: VIZ.com.