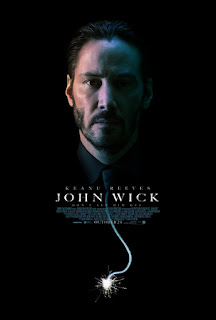 John Wick is a 2014 action and crime-thriller starring Keanu Reeves.  It is directed by Chad Stahelski and David Leitch (although only Stahelski is credited on screen as director).  The film tells the story of an ex-hit man who comes out of retirement to kill the man who viciously wronged him.

Once upon a time, John Wick (Keanu Reeves) was a legendary hit man, a seemingly unstoppable killer.  He was the boogeyman who killed the boogeyman.  Not long after his wife, Helen (Bridget Moynahan), dies of a terminal illness, John receives a puppy that she had bought John to help him cope with her death.  He grows to love the puppy, which he names “Daisy.”

At a gas station, a young gangster named Iosef Tarasov (Alfie Allen) sees John and Daisy in John's vintage 1969 Ford Mustang Mach 1.  Later, Iosef and two of his henchman break into John's home, beats him unconscious, and kills Daisy, before stealing the Mach 1.  Now, John Wick the boogeyman is back, determined to kill Iosef.  The problem is that the young hood is the son of Viggo Tarasov (Michael Nyqvist), the head of the Russian crime syndicate in New York City, a syndicate that John Wick himself helped the elder Tarasov establish.

I have been a fan of Keanu Reeves since I first encountered him the 1980s in film like Dangerous Liaisons (1988) and River's Edge (1986), although I am not a fan of his popular 80s film, Bill & Ted's Excellent Adventure (1989).  I have never thought of Reeves as a great or even good actor; he is either way too stiff or too wooden as a performer.  Still, I enjoyed him in films like the original Point Break (1991) and in The Matrix films.  Reeves' star has dimmed in recent years, and he has said that he no longer gets offered the kind of projects an A-list white male actor would.

When I first saw a television commercial for John Wick, I knew that I would like the film.  However, I never got around to seeing it until early last year when I caught it on one of the premium cable movie channels.  I could not believe how good I thought it was (and I still can't).  Because of the release of the sequel (John Wick: Chapter 2), I decided to watch the first film again.

John Wick is simply a flashy, visually cool shoot-em-up movie with some good set pieces from the hit man movie wheelhouse.  This film, however, works because of Keanu Reeves.  I honestly believe that very few other actors could have made this movie memorable.  Without Keanu, John Wick would have probably ended being straight-to-DVD or VOD (video-on-demand).

If you like Keanu Reeves, you will want to see this, and you will probably want to see it a second time.  It's the magic of Keanu Reeves.  What more can I say?  That magic must have worked on a lot of movie fans because Jack Wick did get a sequel.


The text is copyright © 2017 Leroy Douresseaux. All Rights Reserved. Contact this blog for syndication rights and fees.


Posted by Leroy Douresseaux at 1:54 PM