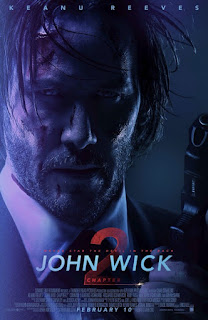 John Wick: Chapter 2 is a 2017 action and crime-thriller starring Keanu Reeves and directed by Chad Stahelski.  It is a direct sequel to the 2014 film, John Wick, and both the original and the sequel were written by Derek Kolstad.  The film tells the story of an ex-hit man who comes out of retirement to kill the man who viciously wrongs him.

Once upon a time, John Wick (Keanu Reeves) was a legendary hit man, a seemingly unstoppable killer also known as “the Boogeyman.”  John retired, but came out of retirement when a young gangster stole his vintage 1969 Ford Mustang Mach 1 and killed his dog.  John Wick: Chapter 2 opens four days after the first film.  John Wick retrieves his stolen car from a chop shop owned by Abram Tarasov, the brother and uncle, respectively, of the men who wronged Wick in the first film.

Later, John receives a visit from the Italian crime lord, Santino D'Antonio (Riccardo Scamarcio).  It seems that Santino swore John Wick to a “marker” (a form of contract) which allowed Wick to retire and to marry his late wife, Helen (Bridget Moynahan).  The marker is an unbreakable promise, personified by a “blood oath” medallion.  Now, Santino is calling in this marker, and he wants John to perform a hit/assassination for him, one guaranteed to leave Wick's life changed forever.

In my review of John Wick, I wrote that I had been a fan of Keanu Reeves since I first encountered him the 1980s in films like Dangerous Liaisons (1988) and River's Edge (1986), although I am not a fan of his popular 80s film, Bill & Ted's Excellent Adventure (1989).  I also wrote that I had never thought of Reeves as a great or even as a good actor; he is either way too stiff or too wooden as a performer.  That aside, I have enjoyed Reeves in films like the original Point Break (1991) and in The Matrix film trilogy.  Reeves' star has dimmed in recent years, but John Wick's success has been something of a revival of Reeves as an action movie star.

I have to be honest.  I love the violent fight scenes and bloody shoot outs that often feature gunshots to the head and blood spurting... no... ejaculating from bodies and heads.  I know the sudden spurts and ejaculations of blood are merely computer-generated effects or practical special effects, but they still thrill me.  I like this film's high-quality production design and the cinematography.  The clothing and costumes are “swell,” and the hotels and other settings are snazzy.

In the middle of it all is one of my favorite movie stars, Keanu Reeves.  I enjoy his John Wick, and I love watching him kill those trying to kill him.  Hey... I'm not the only one enjoying this wanton cinematic, stylish, and slick violence.  There is a third John Wick film set to be released in a few days, as I write this review.  After John Wick: Chapter 2, oh, I am so ready for more.