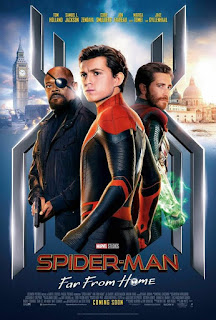 Spider-Man: Far From Home opens after the events depicted in Avengers: Endgame.  In Mexico, Nick Fury (Samuel L. Jackson), the former director of S.H.I.E.L.D., and Maria Hill (Colbie Smulders), a former high-ranking S.H.I.E.L.D. agent who works closely with Fury, arrive to investigate an unnatural storm caused by a creature called an “Elemental.”  There, they meet a super-powered man, Quentin Beck (Jake Gyllenhaal), who arrives to fight the creature.

In New York City, Peter Parker, who is also the Avenger known as Spider-Man (Tom Holland), is about to take a two-week summer trip to Europe with fellow students from Midtown High (the Midtown School of Science and Technology).  Peter Parker, who is still distraught over the death of fellow Avenger, Tony Stark/Iron Man, plans to use the trip to confess to his classmate MJ (Zendaya) his growing romantic feelings for her.  Peter also plans to avoid heroics and leaves his Spider-Man suits at his home in Queens.  However, Fury forcefully interrupts Peter's vacation and tells him that he is the heir to Iron Man's legacy.  Fury also demands that he help Quentin Beck, now known as “Mysterio,” fight an invasion of alien Elemental monsters.  But not all is as it appears.

I really enjoyed 2017's Spider-Man: Homecoming, but I thought this reboot/restart of the Spider-Man film franchise was a fluke.  Thus, as much as I wanted to see the new film, Spider-Man: Far From Home, I thought that it would probably be mediocre.  I am happy to report, dear readers, that it is not only not mediocre, but that it is also as good as Homecoming.

Sam Jackson is almost in top-form as Nick Fury (almost because there is a catch here).  J.B. Smoove and Martin Starr make the most of their scenes as the two teachers chaperoning Midtown High's European vacation.  Marisa Tomei as May Parker, and Jon Favreau as “Happy” Hogan are strong in their respective roles.  Jake Gyllenhaal does a good crazy turn as Mysterio, good because that character is one of the few aspects of the screenplay that is not well done.

Zendaya, who was quite good as MJ in the first film, does even better work in Far From Home.  Every time the film moved away from her, I wanted her back.  Jacob Batalon does scene-stealing in his supporting role as Peter Parker's friend, Ned Leeds, much as he did in the prior film.

But the star here is Tom Holland, now my favorite actor to play Spider-Man.  Holland makes Peter's grief over Tony Stark's death (in Avengers: Endgame) seem real and poignant.  At the same time, he plays the lovelorn and lovesick puppy pursuing MJ with a flair that rivals the best male romantic leads in classic teen movies.  I guess that Tom Holland's ability to play a lovesick boy finally gives Sony Pictures the YA (young adult) angle it wanted when The Amazing Spider-Man (2012) was the reboot of the franchise.

What Holland does best is portray the heroic arc and the heroic journey.  Holland's Peter Parker/Spider-Man believes that he is both not ready and not the right person to take Iron Man's place as the key Earth superhero.  As Peter Parks strives to become the hero he wants to be and is meant to be, Holland performance yield superb drama.

Spider-Man: Far From Home has a strong screenplay and expert directing.  The visual effects are fantastic, especially as seen in the final battle scene which finds Spider-Man spinning, swinging, ducking, dodging, bobbing, weaving, and being the hero, all with death-defying grace and cinematic magical prowess.

In my review of Spider-Man: Homecoming two years ago, I said that the film captured the magic, the sense of wonder, the imagination, and the freshness of Spider-Man's first appearance, which was a 12-page story included in the comic book, Amazing Fantasy #15 (1962).  Spider-Man: Far From Home stays true to the spirit of fun, adventure, mystery, and thrills that the comic book, The Amazing Spider-Man #1 (1963), promised readers over five and a half decades ago.

Posted by Leroy Douresseaux at 2:27 AM