Review: Live-Action "Aladdin" is Quite Lively 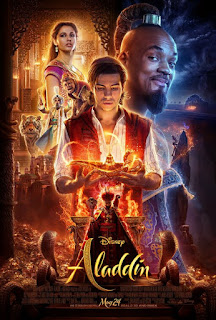 Aladdin is a 2019 fantasy adventure film directed by Guy Ritchie and produced by Walt Disney Pictures.  The film is a live-action remake of Disney's classic animated film, Aladdin (1992), and both films are based on the folktale, “Aladdin,” from the collection, One Thousand and One Nights.  Aladdin 2019 focuses on a kindhearted street urchin and a power-hungry courtier who both vie for a magic lamp that has the power to make their deepest wishes come true.

Aladdin opens in the desert kingdom of Agrabah.  In the capital city, Aladdin (Mena Massoud), a kindhearted young street urchin, makes his living as a thief, lifting food from various stalls in the city's market, often with the help of his pet monkey, Abu.  One day, Aladdin and Abu come to the rescue of a young woman who turns out to be Princess Jasmine of Agrabah (Naomi Scott), and they befriend her although Aladdin assumes that she is someone else.

It turns out that Jasmine is not happy with her station in life.  Her father is The Sultan of Agrabah (Navid Negahban), and Jasmine hopes to one day become the new Sultan.  However, the laws of Agrabah require her, as the daughter of the Sultan, to marry a prince, regardless of her feelings for him, so that he may become the next Sultan.

Meanwhile, the Grand Vizier, Jafar (Marwan Kenzari), has grown tired of being “second best” to the Sultan.  He and his parrot, Iago (Alan Tudyk), seek a “magic lamp” that is hidden within “the Cave of Wonders,” which Jafar believes will give him the power to become the new Sultan.  However, only someone is who worthy (“the diamond in the rough”) can enter the cave, and that turns out to be Aladdin.  So can Aladdin and the mysterious Genie (Will Smith), the jinn of the magic lamp, save Agrabah from Jafar's machinations?

While watching this thoroughly enjoyable live-action film adaptation of Aladdin, I found myself surprised at how well Will Smith performed in a role the late actor Robin Williams made into an all-time famous voice performance in animated film.  The more I thought about it, the more I came to realize that the original film has worked so well via sequels, spin-offs, and other adaptations because Aladdin 1992 is simply great material.

The characters, the setting, the story, the screenplay, the musical and song score, the sets, the costumes, etc. are all top-notch material.  The original film yielded a 2010 Broadway musical the was nominated for several Tony Awards, winning one.  An animated television series, “Aladdin,” ran for three seasons beginning in 1994 and won four of the seven Daytime Emmy nominations it received.  I imagine that even high school theater/drama departments that are not well funded could produce an interesting stage production of Aladdin.  The story and song material that makes up Disney's Aladdin is so good that people would have to go out of their way to mess up an update of Aladdin.

Director Guy Ritchie and his co-screenwriter, John August, do not mess up.  Aladdin 2019 is not a great film, but it is a hugely enjoyable film.  Will Smith, Mena Massoud, and Naomi Scott give good performances, each of them proves able to “hold a tune,” with Massoud and Scott turning out to be quite good at singing.  The costumes and sets are lavish and gorgeous.  The music of Alan Menken, the late Howard Ashman, and Tim Rice – old and new – and the new contributions from the songwriting duo of Pasek & Paul are singalong, toe-tapping delights.

Aladdin 2019 is the kind of broad humor, fantasy-tinged, all-ages entertainment that Disney does so well.  Often, these movies are not high-art, nor do they advance the cinematic arts, but they are fun to watch.  For some of us, they are fun to watch over and over again.  Aladdin 2019 has its awkward moments, and certain scenes fall flat.  Overall, Aladdin 2019 still finds a way to be a delightful time at the movies.  I wish more movies – even some arty ones – would do that more often.