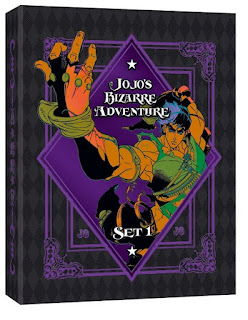 The set is scheduled for retail release on July 25th, 2017 and features the entire first season, Episodes 1-26, of the acclaimed multi-generational fantasy action series. The anime is based on the Phantom Blood and Battle Tendency arcs of the renowned long-running manga series created by Hirohiko Araki (and also published by VIZ Media; rated ‘T+ for Older Teens). The Limited Edition Blu-ray Set for JOJO’S BIZARRE ADVENTURE Season 1 will carry an MSRP of $69.99 U.S. / $81.99 CAN.

Fans that order the set from online retailer The Right Stuf will receive a “Word Effects” print, deep-purple cotton bandana as a special gift with purchase.

The opening season of JOJO’S BIZARRE ADVENTURE is set in late 19th century England, where rivals and surrogate brothers Jonathan Joestar and Dio Brando discover a mysterious stone mask. The mask is an artifact of an ancient Central American culture and is capable of granting its wearer eternal life, but only at a heavy price. As the dark powers of the Stone Mask are unleashed, the brothers’ actions will define legacies that span generations.

“JOJO’S BIZARRE ADVENTURE is a riveting saga depicting the fantastic and audacious adventures of the Joestar family. Based on one of the most popular manga series of all time, no anime or action fan will want to miss it,” says Charlene Ingram, VIZ Media’s Director of Animation Marketing. “Audiences will love how this celebrated manga series is brought to life with memorable characters, unbelievable color palettes and incredible jaw-dropping action sequences.”

For additional information on JOJO’S BIZARRE ADVENTURE and other anime and manga titles distributed and published by VIZ Media, please visit VIZ.com.

Posted by Leroy Douresseaux at 5:24 PM