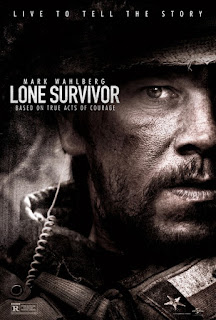 Lone Survivor is a 2013 war film written and directed by Peter Berg.  The film is an adaptation of the 2007 nonfiction book, Lone Survivor: The Eyewitness Account of Operation Redwing and the Lost Heroes of SEAL Team 10, written  Marcus Luttrell and Patrick Robinson.  The film is a dramatization of a failed 2005 mission to kill a Taliban leader in Afghanistan and also of Luttrell and his teammates fight to survive after the mission goes bad.

Lone Survivor opens in Afghanistan at the Bagram Air Base.  There is an Afghan Taliban leader named Ahmad Shah (Yousuf Azami), who is responsible for killing over twenty United States Marines, as well as villagers and refugees who were aiding American forces.  The Navy SEALs are ordered to capture or kill Shah, and as part of the mission, a four-man SEAL reconnaissance and surveillance team gets the task of tracking down Shah and killing him.

That SEAL team:  leader Michael P. “Murph” Murphy (Taylor Kitsch); snipers Marcus Luttrell (Mark Wahlberg) and Matthew "Axe" Axelson (Ben Foster); and communications specialist, Danny Dietz (Emile Hirsch), are inserted into a mountainous region near Shah's base of operations.  The team finds Shah, but the mission inadvertently goes awry.  The SEALs attempt to leave the area, but are forced to battle Taliban forces.  Injured, outnumbered, and at a tactical disadvantage, the SEALs begin a valiant struggle to survive.

Lone Survivor has visceral power, which it reveals in the way it brings the Navy SEALs mission to kill Shah to life.  Director Peter Berg and film editor Colby Parker Jr. bring the viewers deep into the action, so much so that I started to believe that the Taliban was also hunting me.

However, the film's first 34 minutes are largely about military jargon and also about forcing heavy-handed jingoism about the United States' military mission and presence in Afghanistan on the viewer.  Truthfully, Lone Survivor avoids any examination about the U.S. presence in that country.  The movie is strictly about  (1) the mission, (2) military courage, (3) the band-of-brothers ethos in the U.S. military, (4) how great the SEALs are, and (5) survival.  Lone Survivor is not so much a story as it is the depiction of a moment or perhaps, of a particularly memorable sequence of events in the history of the “War on Terror” in Afghanistan.

I think that writer/director Peter Berg attempts to dazzle his audience with muscular, physical film making and with a story of a grueling struggle to survive.  I think this makes the film light on characterization, but heavy on stereotypes and assumptions.  By the time the film presented friendly natives, it was hard for me to believe they were friendly because, except for a child character, everyone seemed like a dangerous brown person.

Still, I am impressed by Mark Wahlberg's performance.  Unable to show a deeper side of Marcus Luttrell, Wahlberg turns himself into a battered-and-bruised wounded warrior in order to make us like Luttrell.  It's like Wahlberg is channeling Mel Gibson in Braveheart (1995).  Peter Berg slyly sets us up for cathartic release when the cavalry shows up to rescue the lone survivor.  It's a cheat, but I guess you do what you have to in order to make a shallow script into a good movie.  And Lone Survivor, in its own way, is indeed a good movie.


Posted by Leroy Douresseaux at 10:39 AM