Review: "You're Next" is Shocking and Shockingly Good 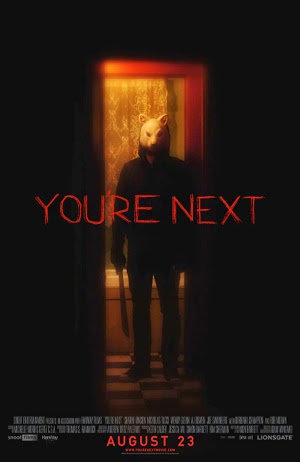 You're Next is a 2011 crime thriller and horror film from director Adam Wingard.  The film debuted at the Toronto International Film Festival in 2011, but did not receive a wide theatrical release until 2013.  You're Next focuses on a family reunion that comes under assault by a gang of masked intruders that attacks family members until someone starts fighting back.

You're Next takes place in a secluded wooded area that might be located in Missouri.  At a large, rustic estate on 5 Edelweiss Drive, Aubrey (Barbara Crampton) and Paul (Rob Moran) gather their four children (three sons and a daughter) for a wedding anniversary party.  Shy Erin (Sharni Vinson) accompanies her boyfriend, Crispian (AJ Bowen), to the reunion.  Also, present are Crispian's brothers, Drake (Joe Swanberg), with his wife, Kelly (Sarah Myers); and Felix (Nicholas Tucci) with his girlfriend, Zee (Wendy Glenn).  Also present is Crispian's sister, Aimee (Amy Seimetz), and her boyfriend, Tariq (Ti West).

That evening, everyone gathers around a large table for a meal.  During a family argument, mainly caused by Crispian and Drake, one of the guests is shockingly murdered.  Soon, the family (whose last name may be “Davison,” although it is not used in the film) is under attack by a unknown number of mysterious killers.  As family and friends die or are gravely wounded, we discover that one of the victims has a secret talent for fighting back and for surviving.

You're Next is like an action movie version of the 2008 film, The Strangers, but even better.  Cast and crew come together and deliver a fan-freaking-tastic film that looks bigger than its paltry budget of one million dollars.  There are thrillers that cost 50 to 100 times more than this “little” film that do not deliver the heart-stopping scares and riveting, hair-trigger drama that You're Next does.  I don't like You're Next.  I frickin' love You're Next.  Encore!  Encore!

I won't spoil it, but the actor that plays the character that fights back delivers a star-making performance.  Director Adam Wingard impresses with his editing work on this film more than he does with his directing, which is also quite good.  Wingard's work here suggests the Coen Bros., with a touch of David Fincher.  Some might describe Simon Barrett's screenplay as implausible, but my cynical worldview considers this Hitchcockian fable damn near a documentary.

If you want thrills, chills, and scares, do yourself a favor and see one of the best horror movies of the decade, You're Next.


Posted by Leroy Douresseaux at 5:39 PM