Review: "Taken 2" Does Not Suffer from Middle Film Blues 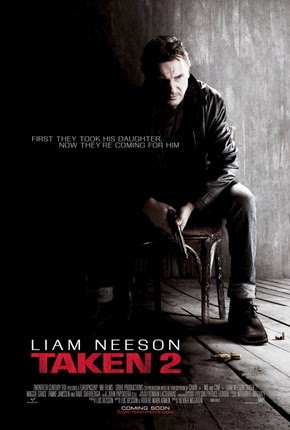 The subject of this movie review is Taken 2, a 2012 French thriller, directed by Olivier Megaton, produced by Luc Besson, and starring Liam Neeson. The film is a sequel to the 2008 film, Taken.  In Taken 2, retired CIA operative Bryan Mills finds himself facing off against the father of a man he killed while hunting for his kidnapped daughter in Paris (as seen in the first film).

Early in Taken 2, former CIA operative, Bryan Mills (Liam Neeson), is still trying to find ways to get closer to his daughter, Kim (Maggie Grace).  This time, it is by helping her pass her driving test, which she has already failed at least twice.  Meanwhile, Bryan's ex-wife and Kim's mother, Lenore (Famke Janssen), is having severe marital problems.  All three of them are about to have worse problems than they expect.

Over in Europe, specifically in Tropojë, Albania, funerals are being held for the Parisian-based, Albanian mobsters Bryan killed for kidnapping Kim in the first film.  Murad (Rade Shergedgia) is a mob boss and the father of Marko, one of the dead men.  Bryan killed Marko by electrocution, and Murad vows to capture Bryan, to bring him to the men's graves, and to kill him there.  They track Bryan to Istanbul, Turkey, where he is vacationing with Lenore and Kim.  Murad and company launch an attack and are able to abduct Bryan and Lenore.  Before Bryan can kick their attackers' asses, however, Kim will have to free his ass.

I had put off seeing Taken for about three years.  I saw it shortly before Taken 2 was released.  I put off seeing Taken 2 for three years, and decided to see it in time for the release of Taken 3.  When I finally saw Taken, I had to admit that it easily surpassed my expectations.  Taken was and remains a terrific thriller, a feisty little revenge flick that plays like a big-time, big studio thriller.

Now, that I have finally seen Taken 2, I have to admit that it surpassed my expectations.  It received such negative reviews that I avoided seeing it in a movie theater.  Taken 2 is not quite as good as Taken, but it isn't far off.  Like the original, Taken 2 strains credulity, and Liam Neeson's Bryan Mills does stuff that takes him into the fantasy realm of Jason Bourne films.  In this sequel, Bryan seems a little less human and more robotic than he was in the original movie.

Still, I like that Maggie Grace's Kim plays a bigger part.  Here, Grace approaches playing the action sidekick with the same terrified energy she used to play the first film's victim.  Yeah, Taken 2 is still a Liam Neeson vehicle, but it seems less so because of what Maggie Grace and even Famke Janssen (an underrated actress) bring to the film.  The always good  Rade Shergedgia (whose last name seems to have multiple spellings) manages to steal quite a bit of this film for himself.  So I am once again taken in by a Taken film.  Taken 2, like the first, is a tasty fast-food film.