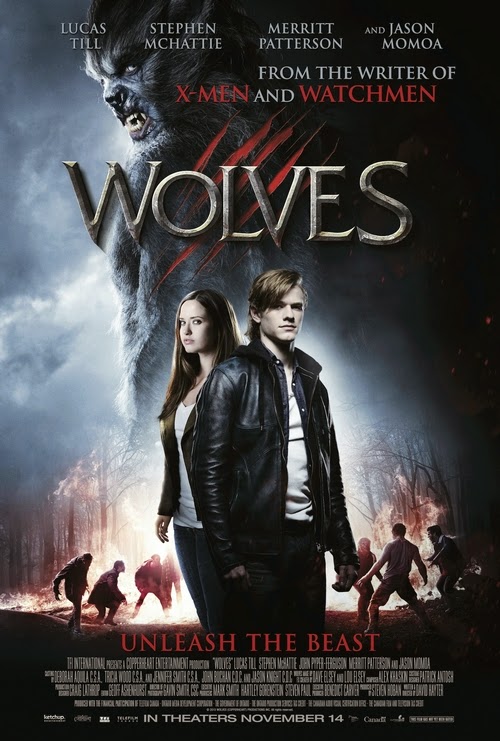 FANTASY/HORROR/DRAMA with elements of action and romance

Wolves is a 2014 Canadian fantasy drama and werewolf film written and directed by David Hayter.  The film's creature effects were created by Oscar winner Dave Elsey (The Wolfman) and Lou Elsey.  Wolves focuses on a high school student who goes on the run and discovers a strange small town that may hold secrets about his family history.

Wolves introduces Cayden Richards (Lucas Till), a popular high school student and football player.  His life, of late, has been complicated by horrifying nightmares and by the fact that Cayden has become unpredictable and wild.  After the brutal murder of his parents, Cayden is forced to leave town, hoping to keep what he is seemingly becoming a secret.

At a bar, Cayden meets a talkative and rundown-looking fellow who goes by the name, “Wild Joe” (John Pyper-Ferguson).  Joe points Cayden to an isolated, small town named Lupine Ridge, but upon arriving there, Cayden is initially not well-received by the townsfolk.  John Tollerman (Stephen McHattie), a local farmer, gives him work and a place to stay.  There, Cayden finds peace, but he is soon caught in a blood feud between rival clans of “wolves.”  To save his life and that of his new friends, Cayden will have to face the alpha male of a gang of wolves, Connor Slaughter (Jason Momoa), who has a shocking connection to Cayden's past.

Wolves' writer-director, David Hayter, was one of the writers on the film, X-Men (2000).  In that first X-Men movie, we are first introduced to the power of mutants, humans with extraordinary powers, when we witness young Rogue hurt a friend with a kiss.  Later, Rogue meets Wolverine (or Logan), another mutant.  It is through Wolverine that we enter the world of the X-Men, a secret band of mutants.

In Wolves, Hayter uses his lead character, Cayden, to both introduce his unique take on the werewolf and to also take the audience into the murky and secretive world of the “wolves.”  Hayter's “wolves” are a unique take on the legends and folktales about werewolves and other lupine shape-shifters.  Instead of deluging the audience with his new ideas and rules about werewolves, Hayter has us learn them as Cayden learns them, experiencing the ups-and-downs and the bumps and bruises that come with entering a new world or environment.

Wolves is not the werewolf film as an X-Men movie, nor is it Twilight.  If anything, Wolves is closer to the oddball werewolf film, Skinwalkers.  Classic werewolf movies, The Wolf Man (1941) and An American Werewolf in London (1981), treat their lead characters as cursed.  Their werewolf affliction might be the result of fate or by a fated accident, but they are cursed and only death will end the curse.

Movies like Skinwalkers and Wolves treat the werewolf as part of a person's basic make-up.  It is inheritance.  It's in the blood, and it's a DNA thing, like being a mutant of the X-Men variety.  After discovering that he is werewolf, Cayden can live by making the best of it, like John Tollerman, or become a killer and a man living like a wild animal, like Connor (who comes to life thanks to a spicy performance by actor, Jason Momoa).  Cayden does not have to be “cursed.”

Another thing that I would like to point out is that Wolves exemplifies the professionalism of the “technical” artists, craftsmen, and people who build the backgrounds and environments of low or small-budget films.  Wolves looks good, from the costumes to the sets.  The werewolf creature effects by Dave Elsey and Lou Elsey are impressive and come close to matching Dave Elsey's work on The Wolfman (2010), for which he and Rick Baker won an Oscar.

Released to VOD (video on demand) before receiving a small theatrical release, Wolves did not get the attention of a big studio release.  It is not a great movie, but, as a fan of werewolf movies, I found it to be quite enjoyable.  Wolves actually has bite, so it should not disappear into some werewolf or horror movie ghetto where mediocre films reside.