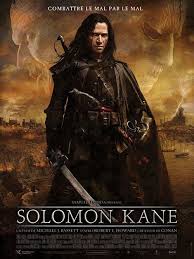 Solomon Kane is a 2009 dark fantasy and action film, starring James Purefoy in the title role.  The film was produced by a consortium of production companies from the countries of the Czech Republic, France, and the United Kingdom.  Solomon Kane first opened in France in December 2009, but did not open in theatres in the United States until September 2012.

Solomon Kane the movie acts as an origin story for the character, and opens in North Africa, in the year 1600.  English mercenary Solomon Kane (James Purefoy) leads the crew of his ship into battle against the occupiers of a fortress town.  It is there that Kane learns that his soul is bound for Hell.  He renounces violence and lives in seclusion before being forced out into the world at large again.

Kane meets William Crowthorn (Pete Postlethwaite) and his wife, Katherine (Alice Krige).  They are Puritans, and with their three children, are planning to immigrate to the New World.  After the Crowthorns’ daughter, Meredith (Rachel Hurd-Wood), is kidnapped by the followers of a sorcerer named Malachi (Jason Flemyng), Kane is once again forced to fight in order to save the girl and perhaps gain the redemption of his soul.

I think Solomon Kane’s writer-director Michael J. Bassett wanted this movie to be like the Lord of the Rings trilogy.  Instead, what Bassett created is like a straight-to-DVD, sword-and-sorcery movie, with only a few moments that suggest LoTR’s epic fantasy.  Solomon Kane isn’t bad, but it isn’t particularly good, mainly because it is inconsistent.

For instance, James Purefoy gives a mostly good performance as Solomon Kane.  However, the screenplay is clumsy and repetitive when it comes to developing Kane’s character.  Plus, I think Purefoy is miscast as Kane.  I would prefer someone taller, leaner, and certainly more dour and gaunt than the pretty Purefoy.

The main villains, Malachi and the Masked Rider (Malachi’s henchman), are superb adversaries, but the two, especially Malachi, are mostly relegated to the background.  Bassett is so determined to focus on Kane’s story that he misses how two great villains can create the kind of potent conflict that invigorates a drama.

Solomon Kane is a fantasy film that has the action, brutality, and violence of other films like it, but lacks the flair of other supernatural action films like Hansel & Gretel: Witch Hunters and Underworld.  The pacing is sometime dry and stiff, which makes the movie feel a bit too long, but if you like the supernatural action genre, Solomon Kane is worth watching – as a rental.


Posted by Leroy Douresseaux at 4:46 AM