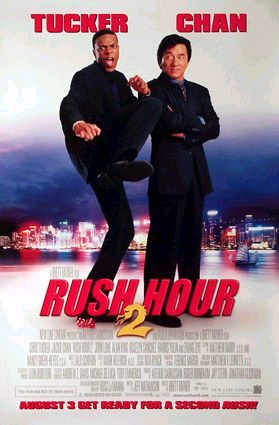 The subject of this movie review is Rush Hour 2, a crime comedy and action film from director Brett Ratner and starring Jackie Chan and Chris Tucker.  The film is a sequel to the 1998 film, Rush Hour.  In the new film, Chan’s Lee and Tucker’s Carter are on vacation in Hong Kong when they get caught up in a counterfeit money scam.

Chief Inspector Lee (Jackie Chan) is once again the foil for Detective James Carter (Chris Tucker) as Carter comes to Hong Kong on vacation and spends much time subjecting Lee to verbal barbs.  The rest and relaxation is cut short when an explosion kills two American agents.  Lee learns that this case may be tied to crime boss Ricky Tan (John Lone).

Tan is a former policeman and was the partner of Lee’s father until Tan betrayed him.  Lee and Carter follow the case back to Los Angeles, where they meet Isabella Molina (Roselyn Sanchez), a sexy customs agent.  Isabella informs them that Tan is part of an international scheme to launder 100 million dollars in counterfeit U.S. currency.  Lee and Carter head to Las Vegas, the epicenter of Tan’s scheme, for an explosive showdown.

Rush Hour 2 is Rush Hour, but with some improvements.  The screen chemistry between Jackie Chan and Chris Tucker, which was quite good in the first film, is even better this time around.  It’s as if three years haven’t passed between the first film and this one.  They have a near-flawless rhythm and flow, and their performances turn this flimsy joke of a crime plot into action/comedy gold.  Rush Hour 2 does have one big problem – there’s not enough of it.