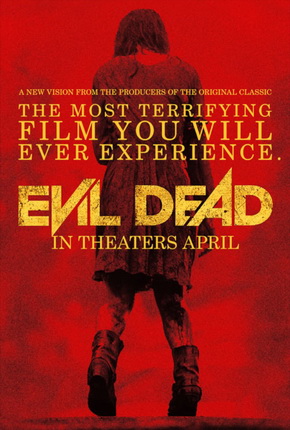 Evil Dead is a 2013 horror movie.  A loose remake of Sam Raimi’s 1981 movie, The Evil Dead, this is the fourth film in the Evil Dead movie franchise, serving partly as a continuation of the series and partly as a reboot of the franchise.  The new Evil Dead focuses on five friends in a remote cabin where they fight off an evil presence that is determined to possess them all.

Mia Allen (Jane Levy) has a severe drug addiction.  Her best friends, Olivia (Jessica Lucas) and Eric (Lou Taylor Pucci), have arranged a getaway to an old remote cabin in the woods that apparently belongs to Mia’s family.  There, they hope that Mia can be forced to get clean or “detox.”  An important member of this intervention is Mia’s estranged brother, David (Shiloh Fernandez), who brings his girlfriend, Natalie (Elizabeth Blackmore), with him.

The five young people arrive at the cabin to find that someone has previously broken into it.  While searching the cabin, they find the remains of a bizarre ritual and also a strange old book.  This book, which is entitled the “Naturom Demonto” (Book of the Dead), leads them to unwittingly summon up demons hiding in the woods surrounding the cabin.

Evil Dead is just a remake – plain and simple.  It is not an exceptional horror film, except for the fact that there is no CGI used in creating the effects (as the director claims).  The Evil Dead was a comic horror film that was shocking, horrifying, comical, and defiantly original.  Evil Dead, the new thang, replaces the comical aspects and trades for family history – both melodramatic and dysfunctional.  I did find myself wishing that Mia could beat her demons and that her brother could reconcile with her, but as the movie went along, I cared less and less.